Have you ever saved the life of a dangerous creature? I spent the other morning trying to do so. Walking the beach near my home in south Florida, I spotted a Portuguese man o’ war that had washed ashore. A man o’ war is like a jellyfish, and, although its sting is rarely deadly, it causes painful welts. Some of the man o’ war’s tentacles were still moving, and it was trying to right itself, lifting its sail to catch the wind. It was clearly still alive but stranded.

As I watched it, I remembered something the Dalai Lama once said. (Mind you, I am paraphrasing. I’m sure his words were much more eloquent than mine!) Before every meal, even if all he is eating is a bowl of rice, the Dalai Lama gives thanks for the life he is about to consume. He recognizes and appreciates that a stalk of rice was once alive and was sacrificed to sustain him. Life is miraculous and precious and sustaining to our bodies and our planet.

So why not, I figured as I stood on the beach, try to save the life of this man o’ war?

Portuguese man o’ wars are siphonophores and their biology is pretty incredible. Although it looks like one animal, each man o’ war is actually a colony of genetically identical individuals called polyps or zooids. These are clones that each have a function and work together. (Despite my highbrow reference to the Dalai Lama, I am now so very tempted to include a much more philistine reference to that famous clone collective, the Borg, and I find that, indeed, resistance is futile…)

Man o’ wars are named for their gas-filled bladder, called a pneumatophore, that floats above the ocean’s surface. Looking like the sail of an 18th century Portuguese warship, this polyp catches the wind and moves the man o’ war around. 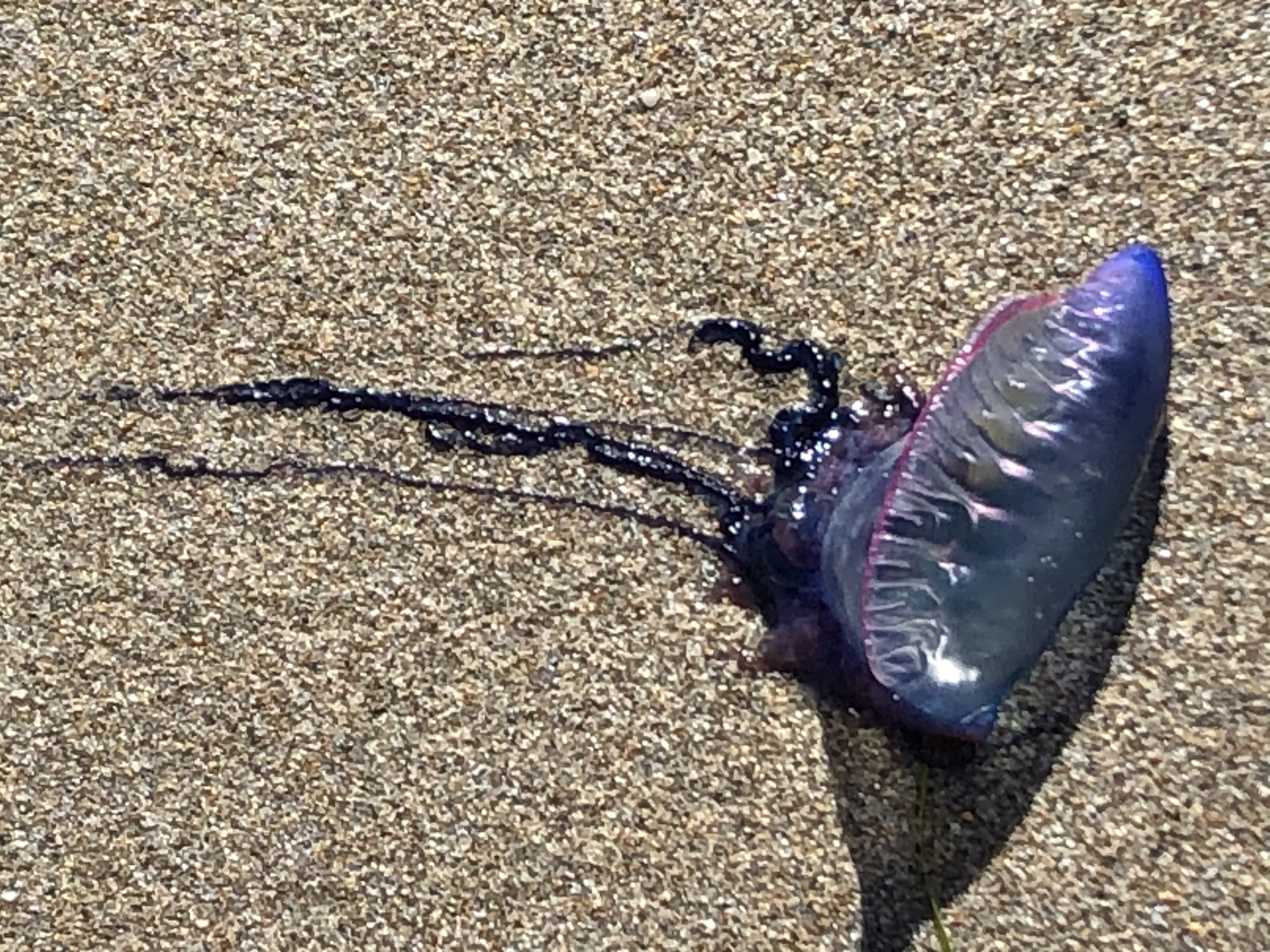 The other most noticeable zooid of the creature are its tentacles. These are suspended from the bladder and trail below the water’s surface. They can be anywhere from 30 to 165 feet long. Each tentacle is covered with nematocysts, which deliver venom that paralyzes and kills crustaceans and small fish.

Muscles in the tentacles convey prey up to the third clone in the colony, the gastrozooid, which is the digestive organ. The fourth zooid is the reproductive system, generally not visible.

Found in tropical and subtropical oceans, man o’ wars can form flotillas of thousands. If they get too close to shore, the waves deposit them on beaches. Since their only method of locomotion is their sail, they frequently get stranded. Beachcombers beware, for the tentacles can still deliver a wallop of a sting even months after a man o’ war washes ashore.

So, there I stood on a glorious sunny morning. Could I continue past this fascinating colony of creatures, thus dooming it to die? I found that I could not.

Then how the heck did I get the thing into the water while ensuring none of those wriggling tentacles zapped me? I seized a plastic fork that littered the beach, and I also gathered a scallop shell (these shells easily span 5 inches). I wriggled the shell under the gas bladder, balanced the fork on top of it in a gentle sandwich and carefully stepped towards the waterline, pulling along the tentacles.

I waded into the water carefully, keeping an eye on the mayhem of those tentacles floating in the water behind me. A wave rolled in, lifting the man o’ war, pulling it out to sea. The next wave, of course, returned it to the beach. 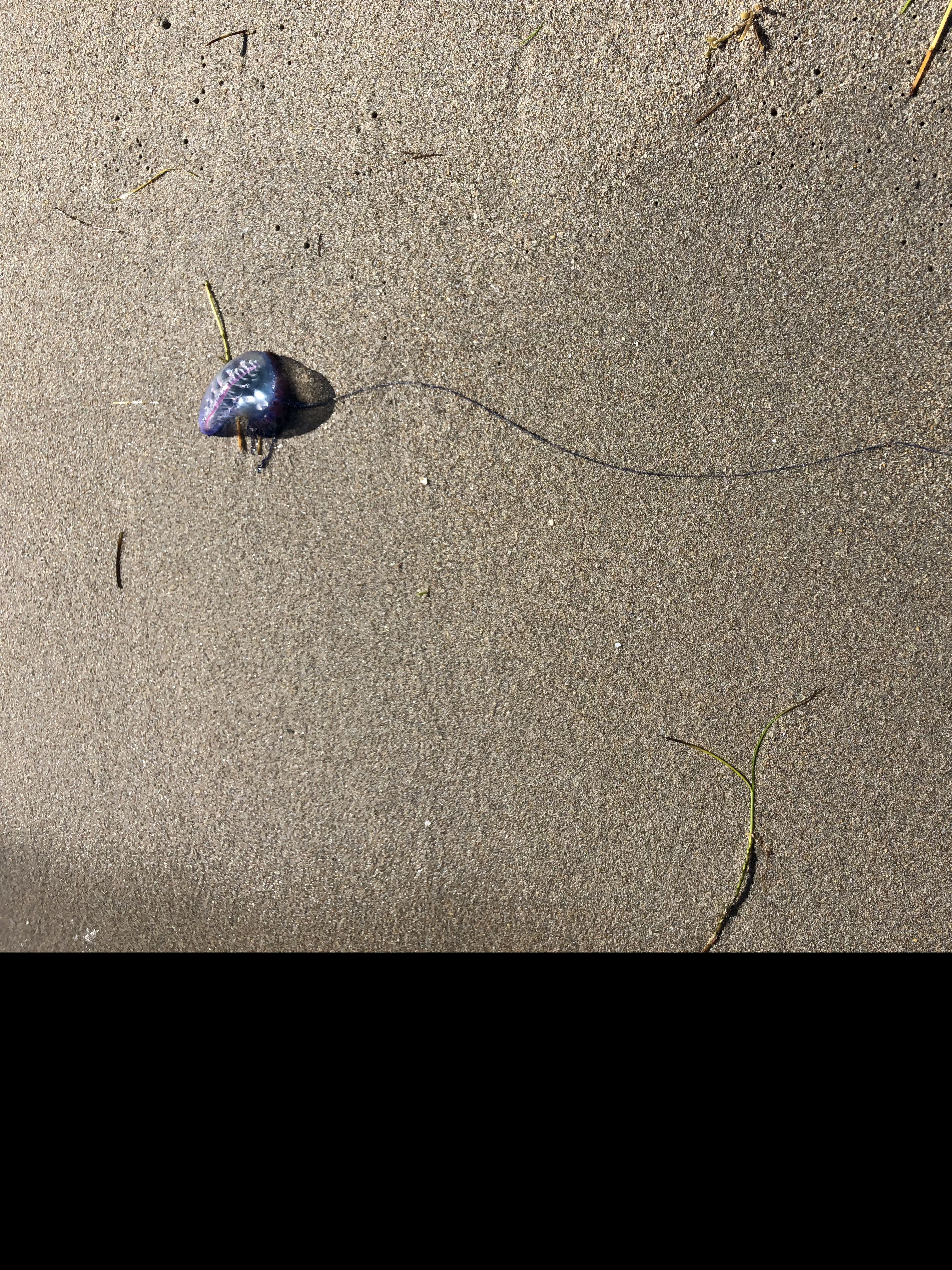 I tried again. And again. I spent about an hour with my man o’ war friend.

Eventually, I abandoned the shell-fork sandwich method and instead balanced the bladder in the shell and used the fork to corral some tentacles away from me so I could get into deeper water and release it. Once behind where the waves were breaking, I let the shell drop to the ocean floor, quickly extricated the fork to take with me and dispose of properly and ran/swam/sploshed around like the dickens to get back to shore without encountering any nematocyst-covered tentacles. Then I walked on down the beach and didn’t turn around to see if my final rescue attempt was successful.

The next day, I didn’t see any man o’ war onshore as I walked the beach. I hope that man o’ war lived to eat some fish, produce more man o’wars and get consumed by one of its natural predators—the whole circle of life thing.

I like thinking I played a part in making that possible. Isn’t that a grand notion? That each of us has the potential to positively impact a life! Seems like a good thing to keep in mind this holiday season, and throughout the coming new year.

Peace, everyone, and happy holidays.

Man o’ war found by the author on a beach in Florida.