Editor’s Note: Laurie Kane is a guest contributor for this column. She currently serves as the vice president for the Board of Trustees for The Growing Stage. Kane is also a Board of Trustees member for the Lake Hopatcong Historical Museum where she works as the museum’s secretary. She and Marty Kane—this column’s usual author—have been married for 24 years.

It has witnessed the heyday of vaudeville and silent film, the arrival of “talkies” and the Golden Age of Hollywood. But after decades of popularity, the Palace Theatre fell into decline and nearly succumbed to the wrecking ball before being rescued by The Growing Stage – The Children’s Theatre of New Jersey.

Now, 100 years since its first opening night, Netcong’s Palace Theatre once again serves the community, offering arts education and entertainment year-round. To commemorate this milestone anniversary, let’s look back at the history of this community treasure.

As 1919 dawned, the American population was ready for change after the destruction of the Great War and a devastating influenza epidemic. New Jersey, like the rest of the nation, entered a more prosperous era and transportation improved.

In the small borough of Netcong—a thriving commercial center in close proximity to the summer resorts of Lake Hopatcong and Budd Lake—a group of businessmen decided the time was right to build the borough’s first theatre.

On April 23, 1919, the Stanhope Eagle reported that rumors of a theatre “took more definite shape yesterday when articles of incorporation were filed in the County Clerk’s office.” Groundbreaking took place that month and by mid-August a concrete building stood on Ledgewood Avenue.
Theatre owners of the day, wishing to differentiate their establishments from less respectable earlier nickelodeons, often chose names designed to inspire respect and awe—hence the many theatres to this day with such names as the Ritz, Paramount and, indeed, the Palace.

Designed by architect Jacob Vreeland of Dover and built by brothers Michael and John Gallo of Netcong, the Palace’s hollow tile and concrete construction is considered unique for a theatre. Built as a general use theatre for vaudeville, movies and public events, Netcong’s Palace was constructed with an orchestra pit and a fly tower, allowing scenery to be raised and lowered. Storefronts on either side of the entrance were occupied, at various times, by an ice cream shop, photography studio, candy store and barber shop.

The Palace Theatre opened its doors on November 10, 1919 and was promptly embraced by the public. Among its first offerings was Netcong High School’s presentation of the comedy “The Time of His Life.” Immediately assuming the role of local community center, the Palace hosted such events as school graduations and the proceedings of civic and trade groups. A typical program on June 8, 1920 featured a minstrel show and eight vaudeville acts including acrobats, dancers and comedians. Tickets ranged from 11 to 33 cents.

The Palace’s first movie offerings were silent, sometimes accompanied by a live musician. The motion picture industry was revolutionized when “The Jazz Singer” ushered in the age of “talkies” in 1927, but it took years for theatres across the country to upgrade equipment in order to make the conversion to sound. The Palace joined the sound era in 1932. 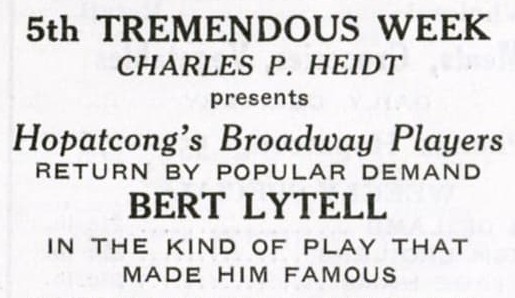 In 1934, the Palace Theatre underwent major renovations under a new management team. A modern marquee and new sound and lighting equipment were installed. The lobby was remodeled, and the interior enhanced with silk wall coverings, ceiling draperies, seats upholstered in red leather and an elaborate chandelier.

The Eagle boasted that Netcong now had “a better movie house than there is anywhere this side of Newark or the Oranges.” In 1935 the Palace truly earned its title as “the coolest spot in town” (and even advertised as such in the Hopatcong Water Carnival souvenir program) when it became one of the first local structures to be air-conditioned. 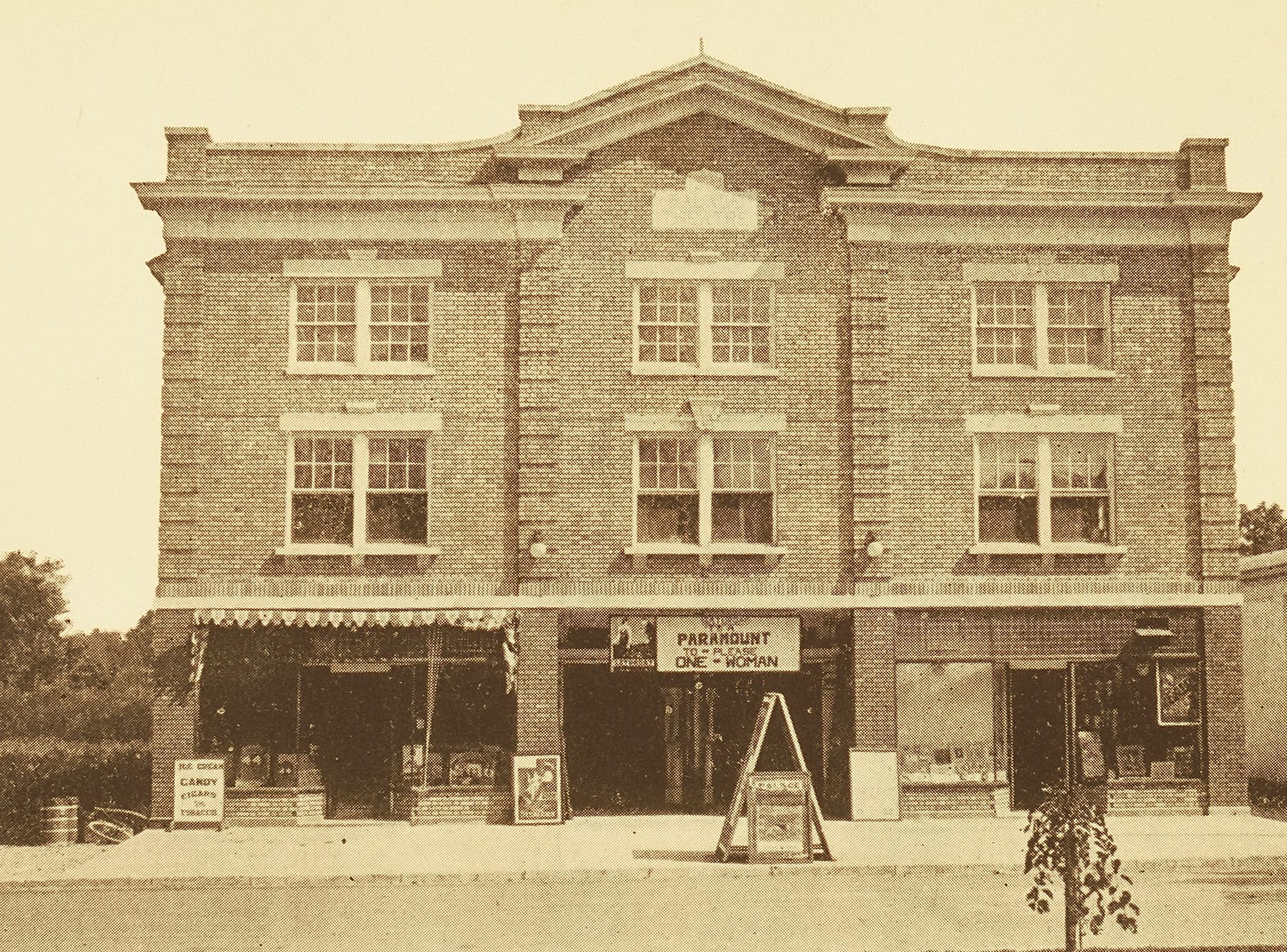 Its exterior received a complete makeover in 1938, when metal lathe and stucco were applied to the original Colonial Revival brick façade and glass block installed over some of the windows, creating a modern Art Deco look.

During this period, management began to focus solely on movies, which changed every two to three days. Often a double feature was shown, along with news and sports reels, short films, serials or cartoons. The Breeze praised the Palace as “a delightful place to spend an afternoon or evening,” and in 1936 complimented the Hopatcong resort area for its “fine theatres which… show the latest in movies and often appear simultaneously with their opening in New York.”

The period from the 1930s to the late 1960s is called the Golden Age of Hollywood and indeed were shining years for the Palace. With Dover’s Baker Theatre and the Ledgewood Drive-In as its closest competition, the Palace was the theatre of choice for many families around the lake. In a July 1945 editorial published in the Stanhope, management wrote: “We don’t presume to compete in size with any of the super duper deluxers of the city but we consider ourselves just as necessary… We serve the people of this area with their chief means of entertainment.” 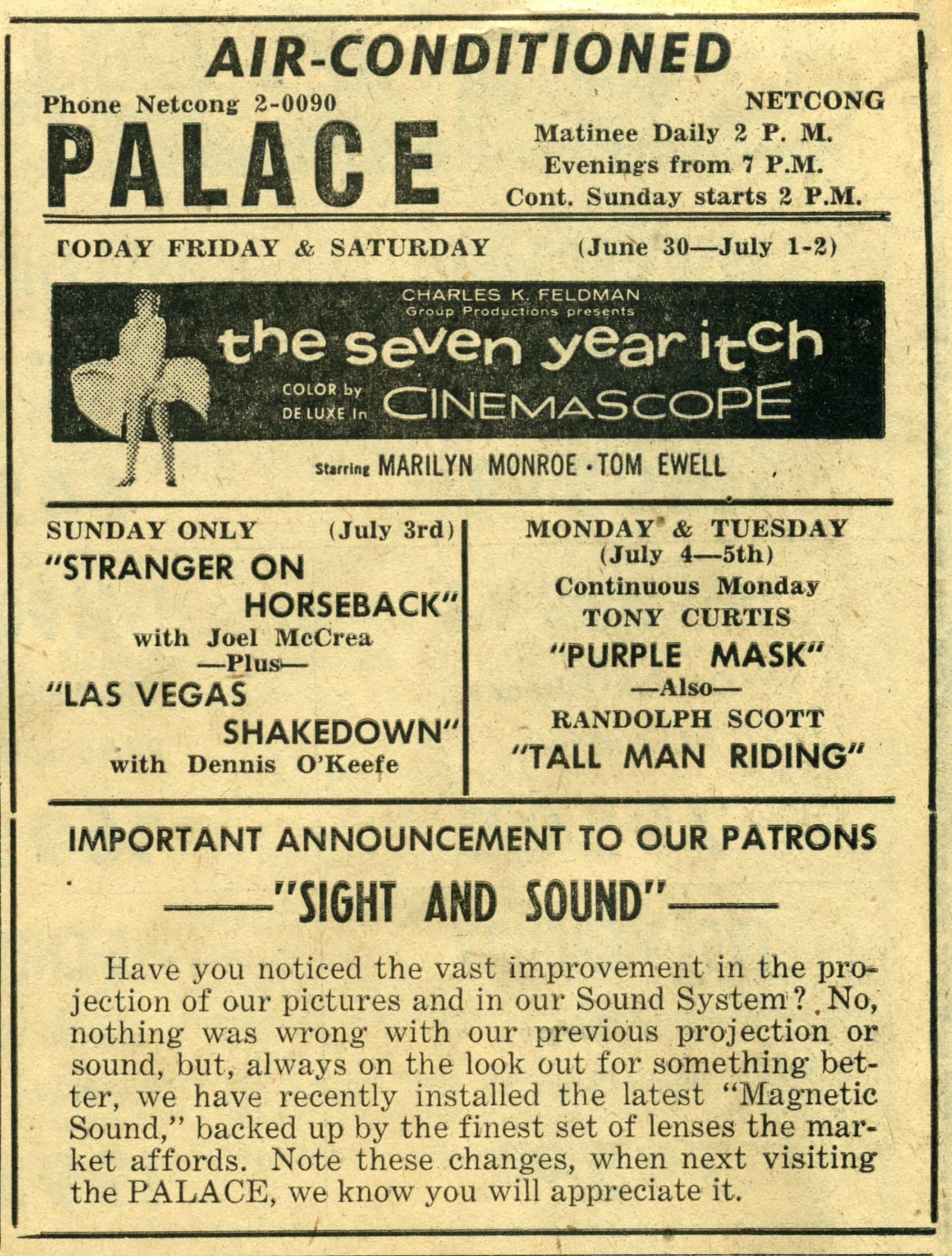 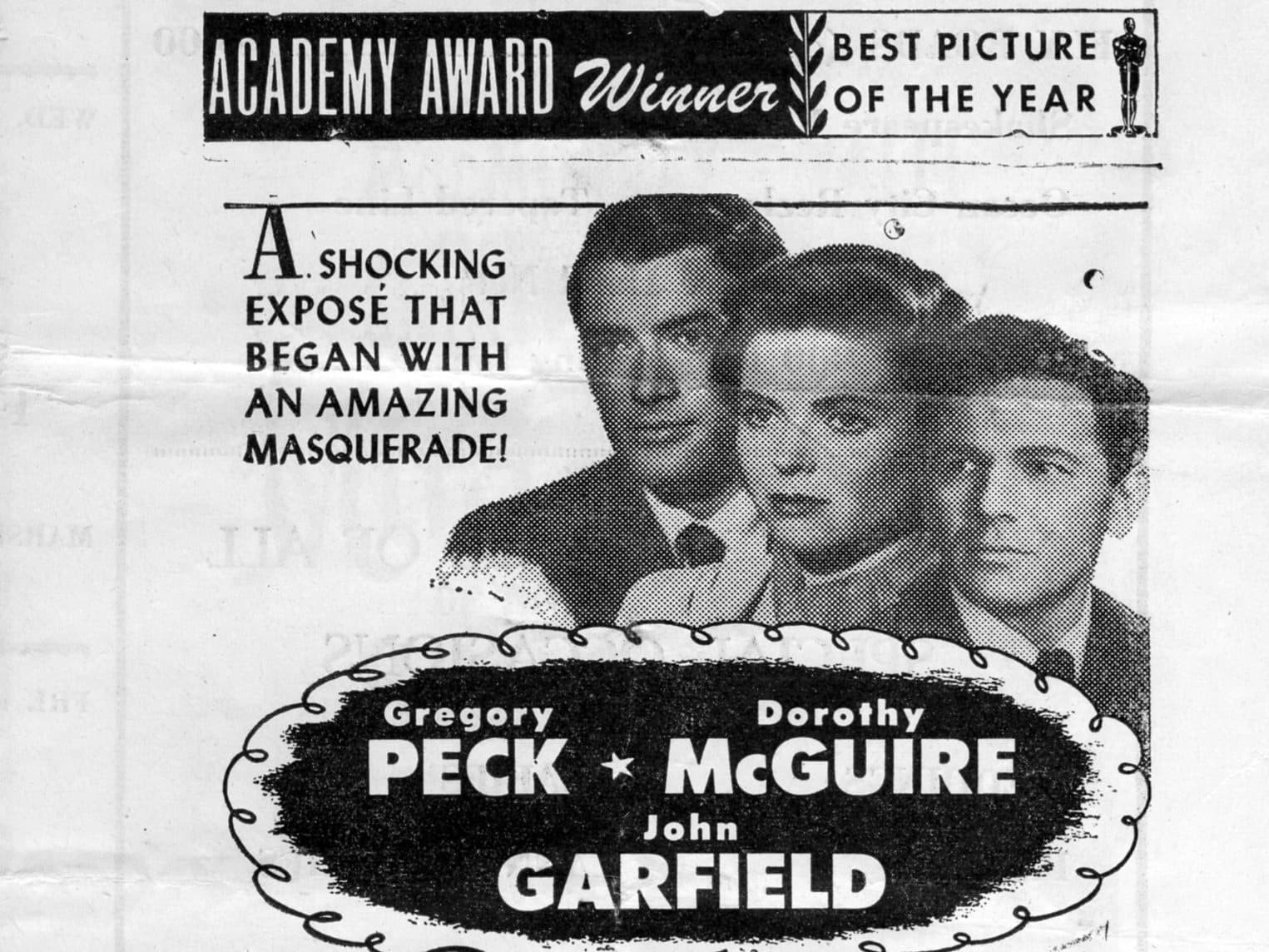 Audiences flocked to see the latest pictures, even in challenging times. During the Depression, when theatres across the nation enticed patrons with contests and giveaways, the Palace offered free cooking classes and throughout the war years of the 1940s offered special events like jitterbug contests and weekly amateur nights. 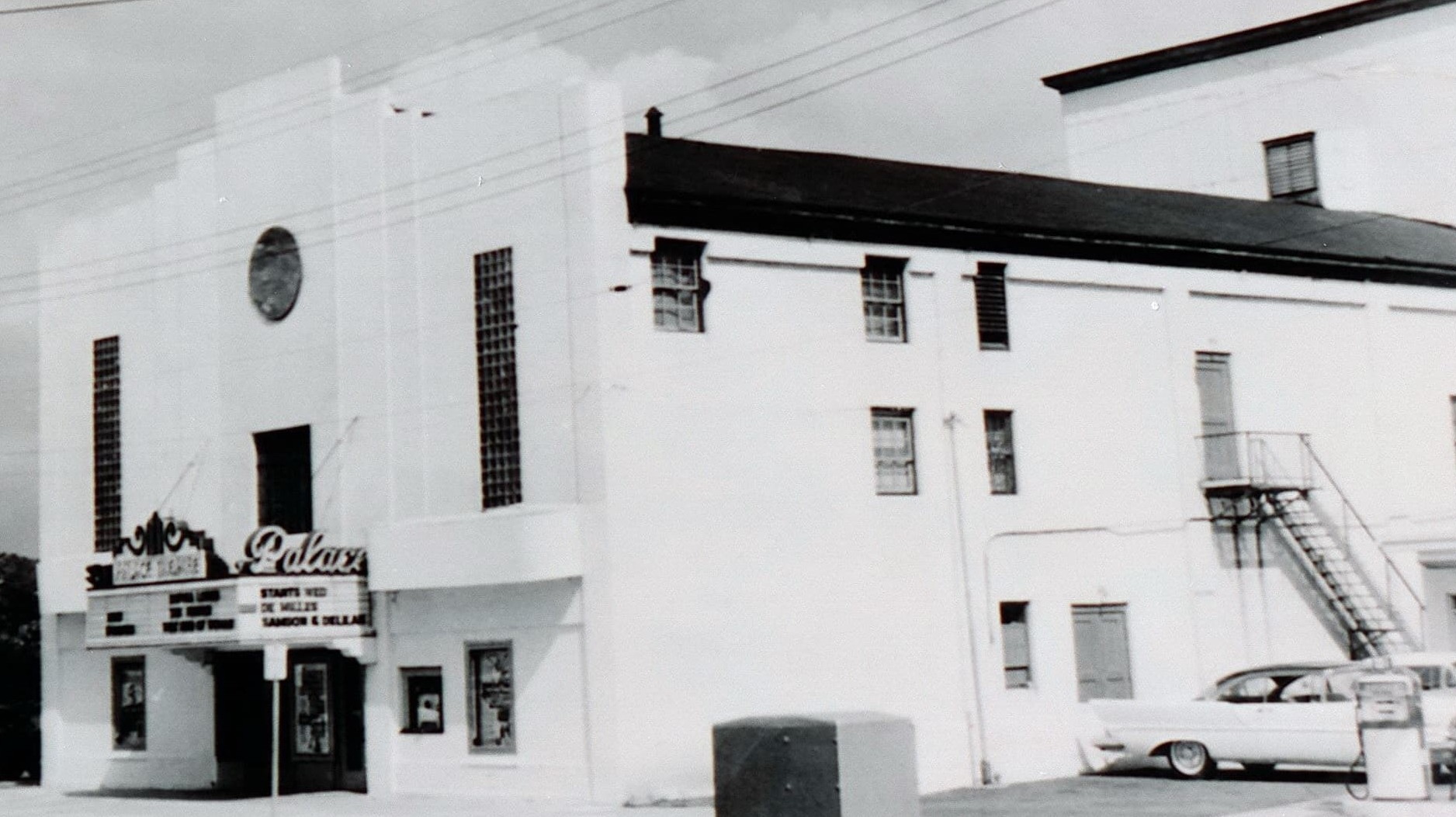 Business remained steady throughout the 1950s and into the 1960s, but change was on the horizon as audiences began to abandon neighborhood theatres for modern cineplexes. The advent of cable TV and VCRs prompted many former patrons to simply stay home. As its customer base dwindled, ownership of the Palace changed and the once family-friendly theatre was reduced to showing X-rated films.

In the late 1970s an attempt was made to clean up the Palace. Renamed the Lakeside Theatre, it hung on for a few more years by showing second-run films with $1.50 admission at all times, but finally closed its doors and was sold to a moving and storage company in 1981. The seats were removed and the building was used as a warehouse and allowed to deteriorate. It was in a state of disrepair with leaks, broken windows and pigeons roosting upstairs when Midlantic Bank foreclosed in 1994.

The Palace Theatre’s golden years seemed a distant memory, but its prospects changed dramatically in 1995 when The Growing Stage entered the scene. Founded in 1982 by Steve Fredericks, The Growing Stage had been performing in the old Williamson School in Chester. In need of a new home when the Williamson’s owners decided to sell, the company took a leap of faith and acquired the ailing Palace 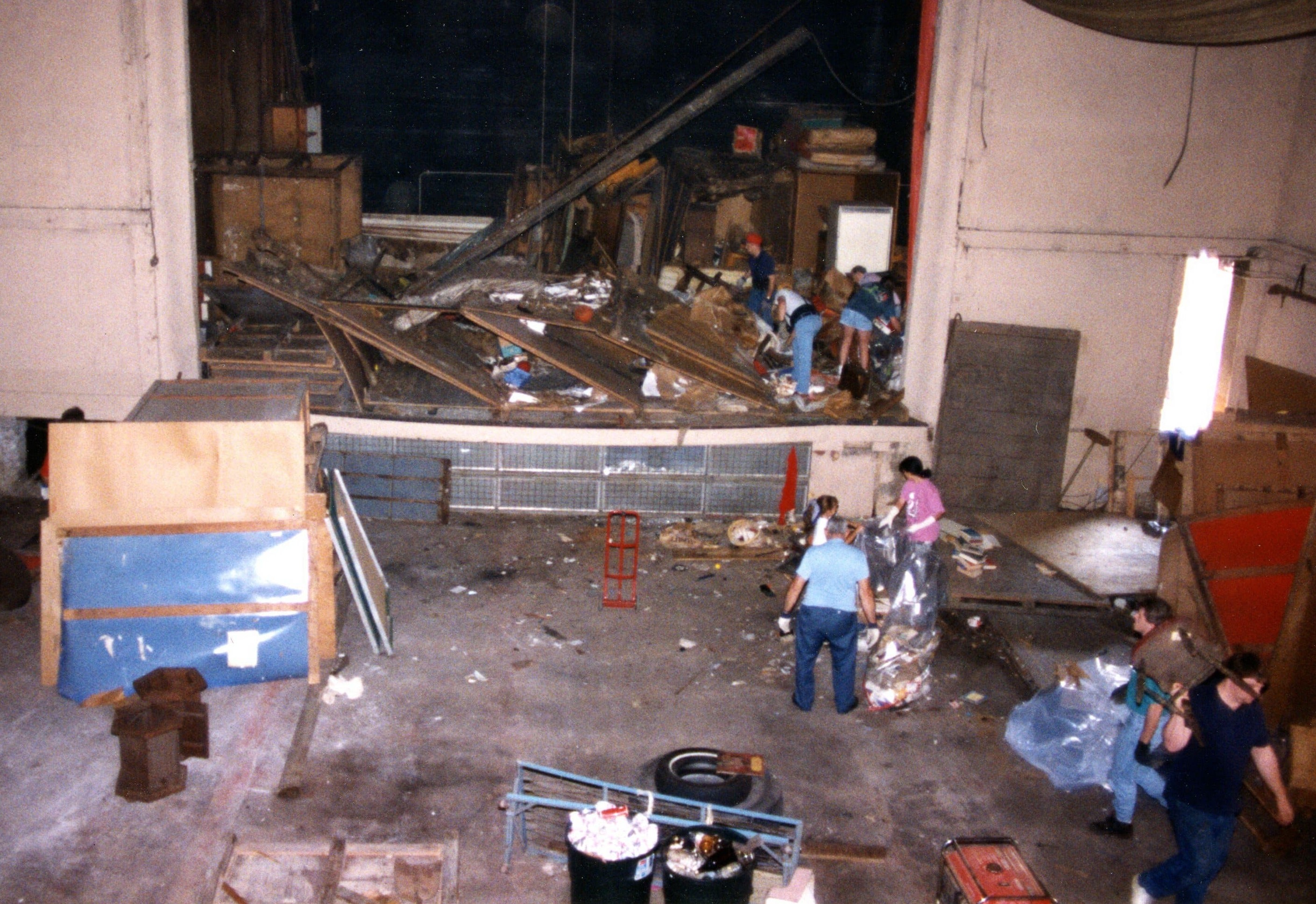 Staff and volunteers quickly mobilized to clear the mountains of debris inside the theatre. Though the challenges were many, there were some pleasant surprises as the building’s surviving features were revealed, including the decorative tin ceiling and chandelier medallion. One year and 15 dumpsters later, the theatre was habitable and ready for its first opening night in many years. On March 1, 1996, an enthusiastic audience enjoyed a magical live performance of “The Wizard of Oz.”

That first journey down the yellow brick road was just the beginning. Over the past 24 years, The Growing Stage has revitalized the building by stripping off peeling stucco to restore the original brick façade, creating classroom space for its educational programs, reinstalling air conditioning and more. Artist-in-residence Perry Arthur Kroeger’s stunning painted murals have transformed the interior walls.

Modernized while preserving its historic design elements, the Palace is now listed on several historic registers. Remarkably, The Growing Stage has accomplished this while also producing season after season of quality professional productions, introducing thousands of young people to the magic of live theatre along the way.

This milestone anniversary is a perfect time to visit the Palace. Patrons attending a performance of “Matilda” or “Elf,” which kick off The Growing Stage’s 38th Main Stage season this fall, can unplug and enjoy an afternoon or evening of live entertainment with family and friends just as audiences did back in 1919.

And that is a cause for celebration!