From the 1880s to the 1930s, Lake Hopatcong was a major northeast resort with many hotels and rooming houses operating on its shores. During the 1925 season alone, some 36 establishments were open for business. One question commonly asked at the Lake Hopatcong Historical Museum is, “how many of the hotel buildings still stand?”

While the large hotels are all gone, most having been destroyed by fire, a small number of buildings survive that bear witness to the era when Lake Hopatcong competed with the likes of Asbury Park and Atlantic City. In all, some nine buildings that once housed hotels still stand at Lake Hopatcong. All of them found alternate uses after the hotel era passed, and several were small enough to transition to private homes.

The largest of the surviving hotels is the Jefferson House. The original building that occupied the site was known as Lee’s Pavilion. Built in 1899 to serve visitors arriving at Nolan’s Point via the Central Railroad of New Jersey, the pavilion was greatly enlarged and expanded by original owner John Lee and his son Andrew over the next two decades. It featured numerous stores and services, a dance hall and some 20 hotel rooms. Tragedy struck on the night of Oct. 27, 1924 when the entire structure was destroyed in a fire that wiped out 13 buildings on Nolan’s Point. A new Lee’s Pavilion arose from the ashes and opened in 1927. 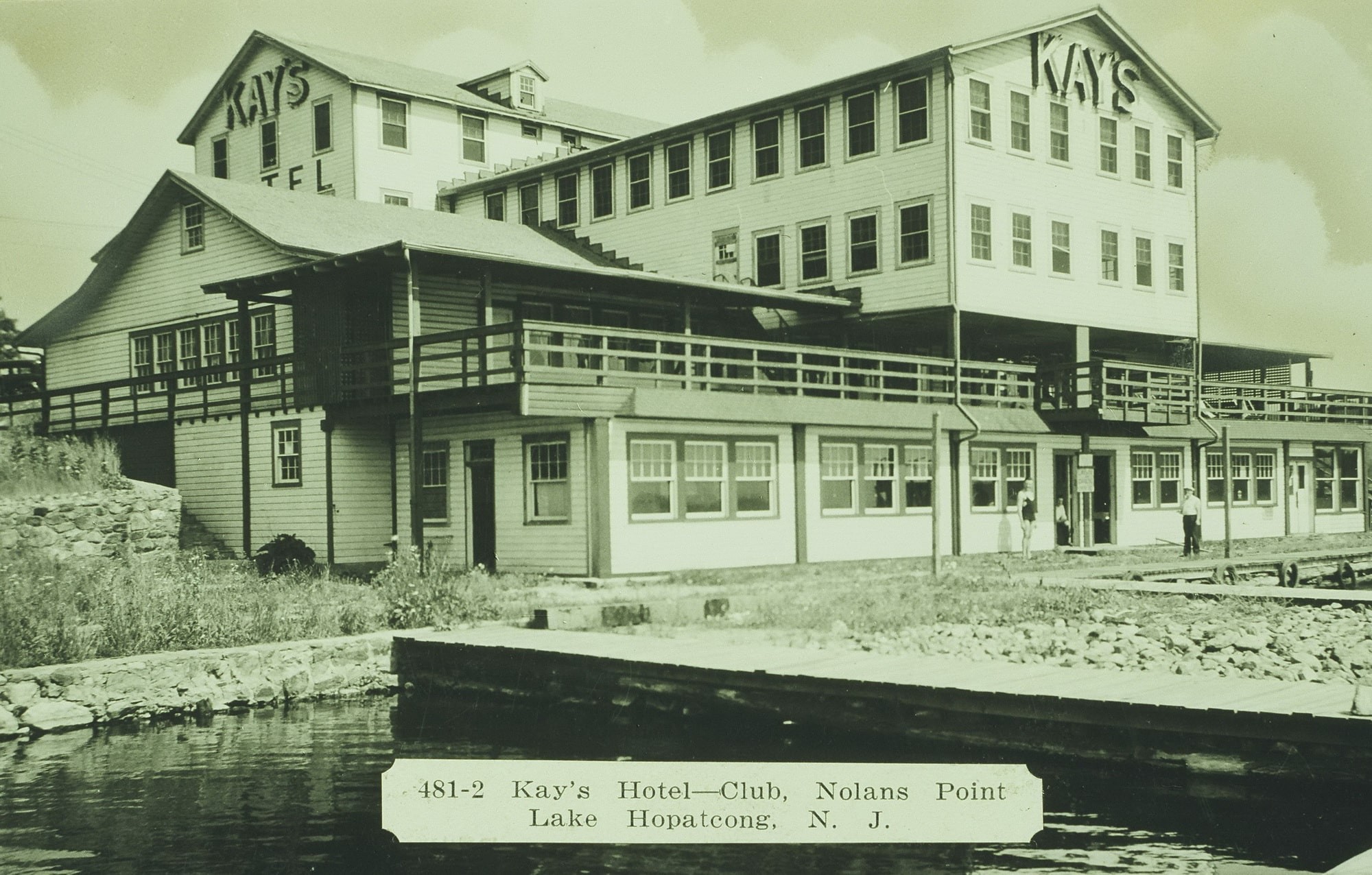 In 1929 Lee’s Pavilion was sold and renamed Kay’s Hotel. It featured a restaurant with dancing and entertainment every night. Operating through the Depression, Kay’s used the slogan “Where Good Fellows Get Together” and promised “never a dull moment.” Kay’s ran events such as bathing beauty contests, amateur nights, boxing exhibitions, celebrity nights, and dance contests to bring customers in during difficult economic times. The hotel also advertised newly decorated rooms—each with running water!

In 1938, Kay’s became the Colony Club, a short-lived restricted Christian establishment with a membership plan. In 1941, the Jefferson House premiered. Billed as one of the lake’s finest dining and dance spots, the new establishment still courted a “restricted” policy, which was apparently dropped after the war. The Jefferson House had several owners, including Joseph Langley, who operated the hotel for some 10 years before selling to Herb Spencer in 1962. Spencer renamed the business the “Jefferson House Boatel,” and ran it as both a hotel and marina. For the 1964 season, Spencer introduced Broadway musicals featuring such hits as “Anything Goes” and “No, No Nanette.

Spencer sold in September 1967 to Herman Orth, who owned and operated the sightseeing boats from Bertrand Island and Hopatcong State Park. Orth intended to use the Jefferson House as a marina, but he passed away just nine months later and his sons Billy and Allan took the Jefferson House in a new direction. Together with their mother, Ida, the Orth boys would transform the Jefferson House in the years that followed, greatly modernizing the facility and establishing it as the largest and most modern venue at Lake Hopatcong. After trying out a few different names and themes along the way (such as the Club New Orleans and the Pirate’s Den) the Orths eventually settled back on the Jefferson House and the business has now been a mainstay at the lake for over four decades. Some of the original hotel rooms survive in the back of the building and have been turned into apartments.

Just around the corner from the Jefferson House, the Windlass Restaurant stands on the site of the lake’s first tourist establishment, Lake Pavilion, later known as Allen’s Pavilion. Constructed in the 1880s, Allen’s featured a dance hall, restaurant, picnic grounds, amusements, and 20 hotel rooms. Allen’s was destroyed by fires in 1894, 1908 and 1919, but each time was rebuilt larger and more modern. The Allen family continued to operate the pavilion and in 1924 advertised it as “the oldest amusement centre in northern New Jersey.” Change came in 1928 when the Allen family, after 41 years of ownership, sold and the property officially became part of Nolan’s Point Amusement Park.

Following the closure of Nolan’s Point Amusement Park during the Depression, Frank Crater took over the old Allen’s Pavilion. In 1936, with business suffering, Crater converted the large ballroom into Lake Hopatcong’s first roller rink. In 1948, a snow-filled winter at Lake Hopatcong caused some six feet of snow to pile up. There was significant damage throughout the area. That February, Crater’s second floor roller skating rink collapsed. Crater was able to salvage part of the building. This smaller structure (without any hotel rooms) became Crater’s Tavern. In 1963, Crater sold the property to Ralph Spinelli Sr. and his wife, Amelia, who renamed it the Windlass and opened it as a luncheonette for fishermen and boaters. Together with their son, Ralph Jr., they transformed the luncheonette into a full-scale Italian restaurant, which quickly became a Lake Hopatcong favorite. The Windlass has now been a part of Lake Hopatcong and in the Spinelli family for almost 50 years.

Justamere Lodge operated as a hotel for some 50 years, run by the Huber family for much of this time. It was built on Point Pleasant in 1910 at a cost of $25,000. A small hotel with 21 rooms, in the 1940s it advertised home cooked meals for a Christian clientele at rates of $30 per week. The hotel operated into the 1960s, and was then converted into a private residence and has remained so for the past 50 years. A shuffleboard court from the hotel days can still be seen outside and it is understood the owners still have doors with room numbers stored away. 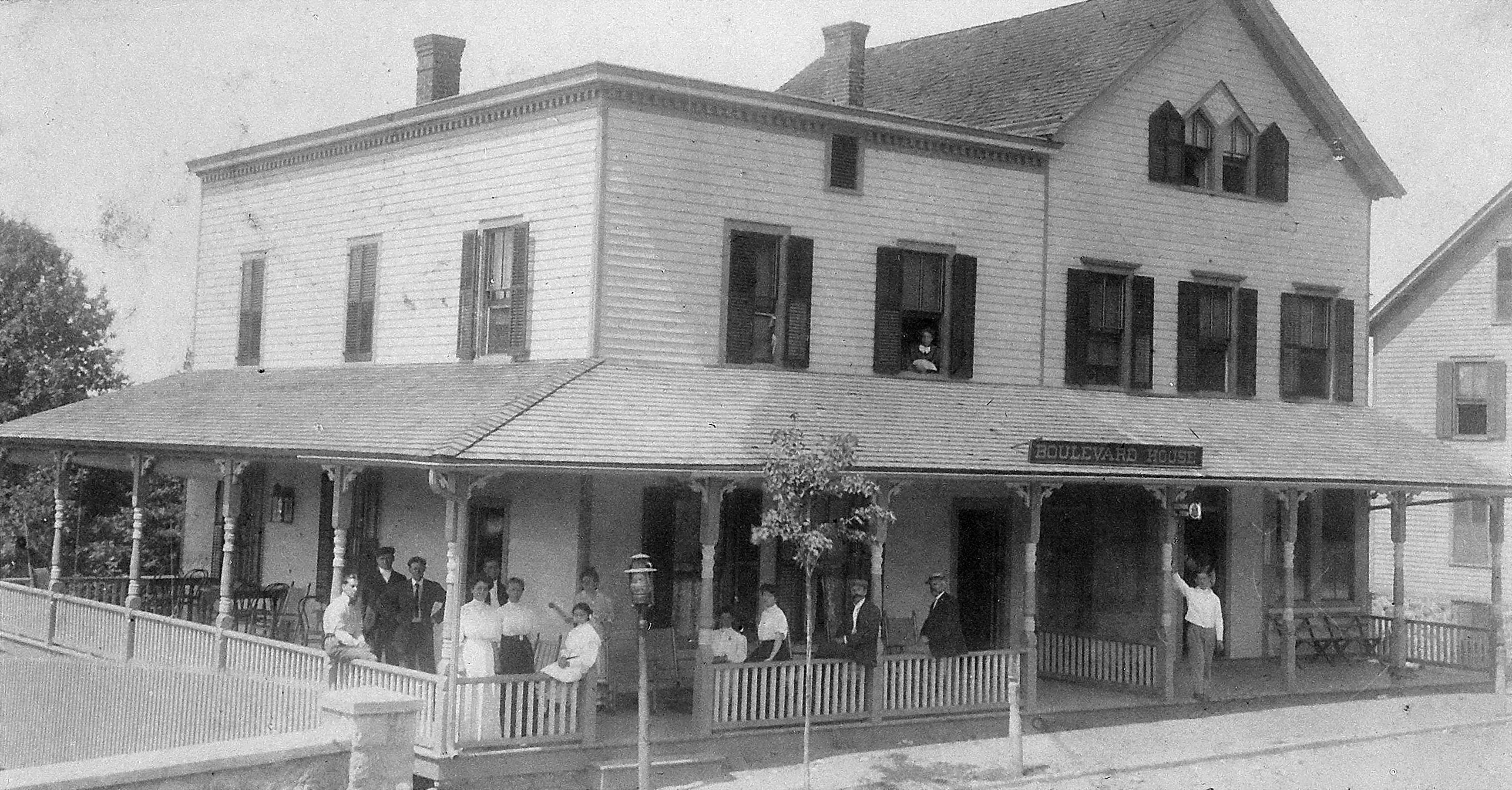 The Boulevard House, also known as the Hotel Boulevard, was located on Howard Boulevard in Mount Arlington and had some 12 rooms. It operated from the 1890s until the 1940s, and for a time was run by the Chaplin family. Conveniently located on the main street in Mount Arlington, the structure was converted to commercial use after the Second World War. During the 1990s it operated successfully as a restaurant and for the past decade has served as a martial arts studio.

Also in Mount Arlington was a small hotel called the Passaic Country Club. Prior to becoming a hotel in 1923, it had been a cottage, known as Bella Vista, which was owned by the Tilt family of Paterson whose wealth came from running a silk mill. Featuring Hungarian cuisine, the Passaic Country Club advertised “the novel idea of giving a homelike atmosphere to a surrounding that was formerly a private residence.” This establishment offered dancing every evening with music provided “by a well-known New York college orchestra.” The Passaic Country Club evidently did a successful business but the idea of the building being used as a hotel was challenged by the neighbors. In July 1926, a judge ruled that it was illegally operating as a rooming house under the guise of being a private club. In 1928, the property was sold to the Felician Sisters to complete the St. Francis of Assisi convent. Used for many years as a retreat house, the property is now for sale.

Angler’s Retreat was a small hotel or rooming house which was opened on Cow Tongue Point by Thomas Henderson in 1894. It catered mainly to fishermen and operated into the teens. In 1914, the building underwent extensive renovations and became the new home of the Maxim Park Yacht Club, whose first officers included Hudson Maxim and Rex Beach, one of America’s most successful authors of the time. The club opened on Aug. 14, 1915 with a parade of 75 boats. The Maxim Park Yacht Club closed in the 1920s and the former hotel was converted into a private home. It has remained in the same family ever since and is still one of the lake’s most picturesque residences. 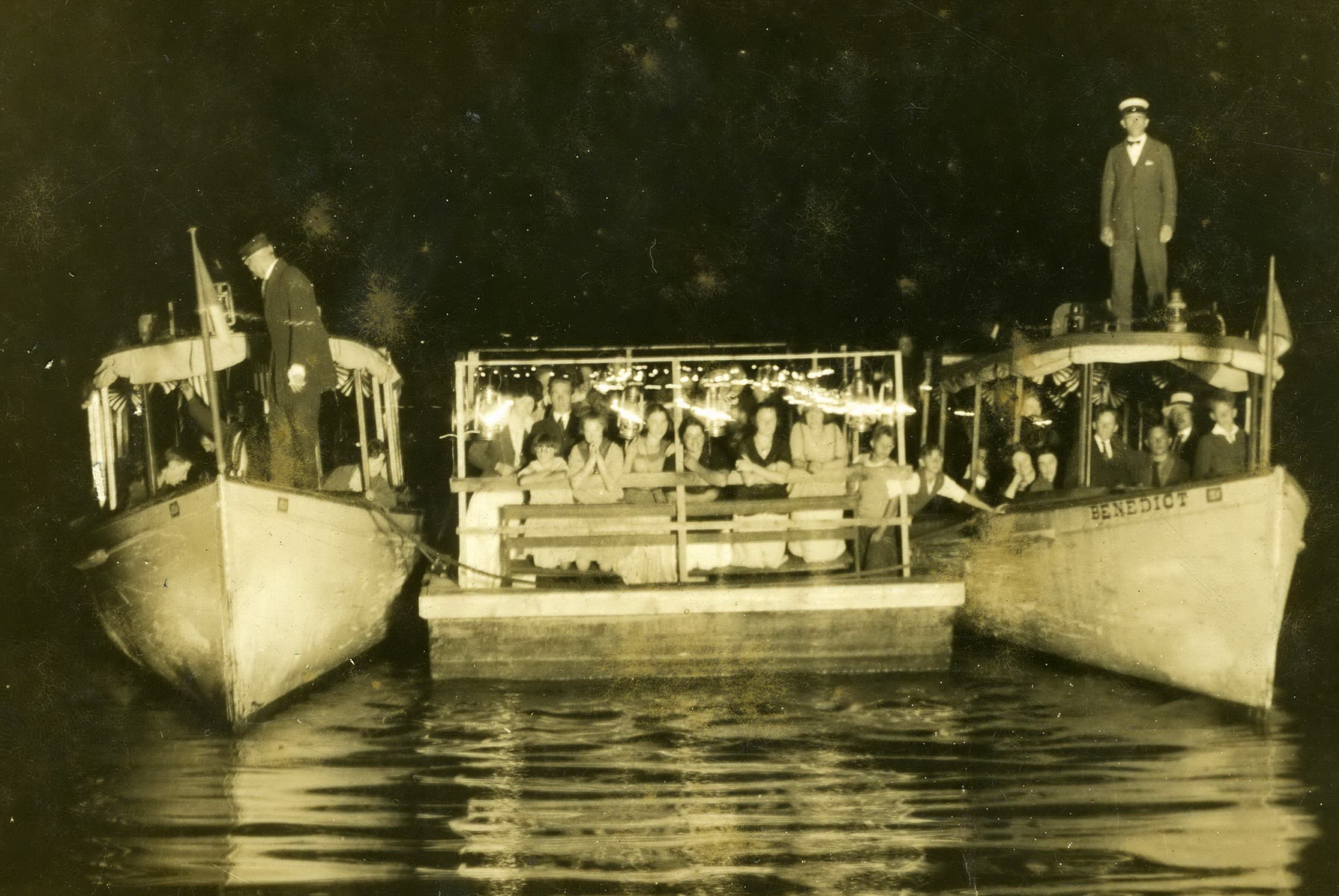 Sister Islands was the name given to three small islands in Byram Cove. In 1905, a cottage, boathouse and ice house were built across two of the islands. In 1912, the summer cottage was sold to Thomas Henderson, owner of Angler’s Retreat, who converted the property into the Sister Islands Hotel. It operated during the teens, after which it was converted back to a private residence. Carl Sherman, a former Attorney General of the State of New York, bought Sister Islands in the 1940s and converted the ice house into a second home. The two houses remain on Sister Islands today.

Playhouse Park, located in Great Cove, was billed as “The Bungalow Retreat” when built in 1919 by Fred H. Buck. Consisting of separate cottages, each with three to five rooms, Playhouse Park included a restaurant for its guests. By 1924, Playhouse Park had grown to 25 cottages. A 1925 directory explained that “the concept for Playhouse Park is to eliminate as much housework as possible, but to preserve the freedom of home life impossible at a hotel. Each bungalow contains a large living room, kitchen and one to three bedrooms. The furniture is plain but sufficient. Each has a delightful living porch with extensive lake views framed by old oak trees. Artesian well water piped to each, electric lights, garage, dock with private beach. May be rented by week, month or season. Clientele is gentile.” Playhouse Park continued to operate as rentals throughout the 1950s, and many of the original buildings survive today as private homes. 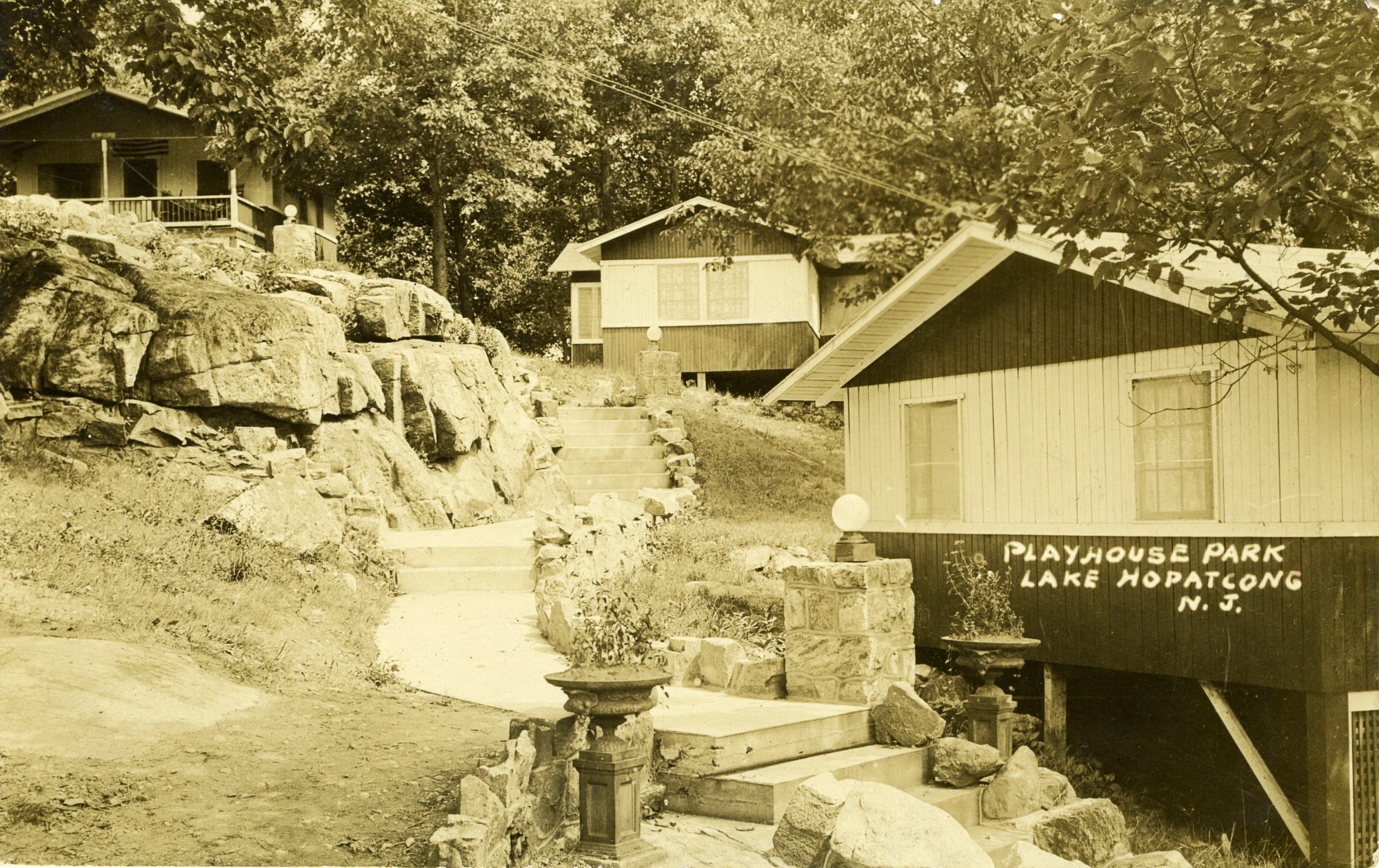 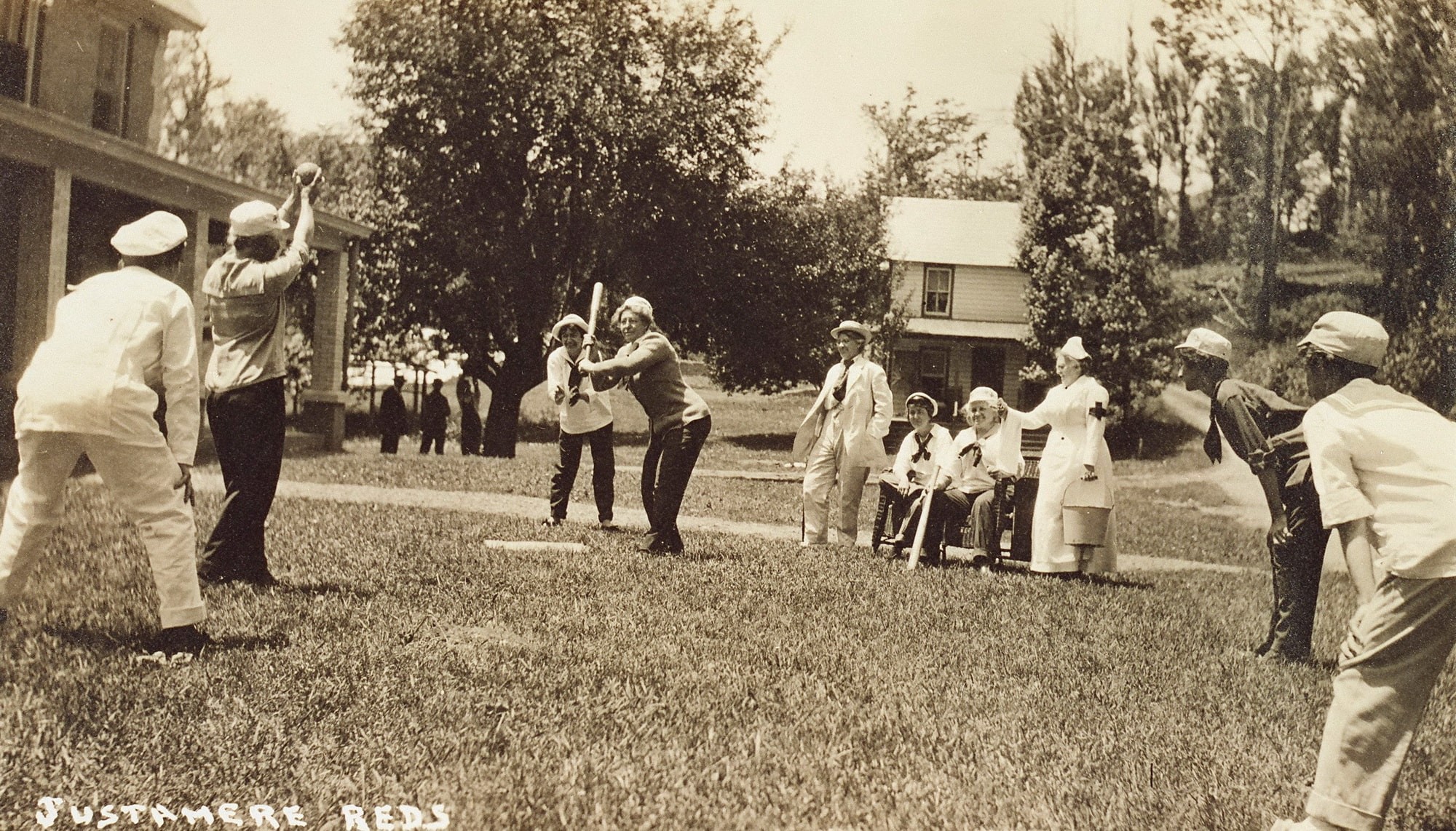 The Old Orchard Inn was built in Woodport in 1910. Bradley J. Bloodgood had worked for many years in the hotel business before coming to Lake Hopatcong, where he bought over 25 acres of property. He constructed a very rustic hotel built of logs, which he expanded a few times. Located just off Route 181, the Old Orchard Inn survives today as part of Willow Lake Day Camp.

Parts of other hotels also survive—the garages of the Bon Air and Hopatcong House are both small apartment buildings, for example, and a few cottages, boathouses and other small structures exist that once belonged to various hotels. In addition, staircases, beaches and foundations from past Lake Hopatcong hotels remain in numerous locations. While it is unfortunate that no hotel continues to operate at the lake, these familiar buildings provide a direct link to a colorful past.

I spent e very summer from the time I was born, 1941, till I got married in 1960 at Bryan Bay near Bear Pond and it is the happiest time of my life.  Now near 80 I think back and remember all the good times and happy years we all had.  remember the Nickel Ferry on Monday nights that would stop by our dock to take us to Bertram’s Island.  Monday was Nickel Night!  The first motor boats and trying to swim across the beautiful lake!!!  Great times and I’m sorry the kids nowadays don’t have such wonderful safe times.  thanks for the momories!!!!