Summer brings a multitude of joys, chief among them its unique sounds. Children’s joyous squeals, vibrant humming boat motors, kayak paddles sluicing through lake water— each conjures a smile. Nature, too, has its own summer playlist of sounds to enjoy, from fat bumblebees buzzing as they gather nectar to frogs chirping after a rainstorm.

Some of my favorite sound producers are katydids, those insects often mistakenly thought of as crickets, that hum and strum their love songs long into the late summer evenings. Eponymously named for the debate they sing—“Katy did…Katy didn’t!,”—these bright green bugs hold their long wings vertically folded over their backs, camouflaging to resemble leaves. They are herbaceous, but don’t damage crops, flowers or shrubs.

During the day they hang out motionless in foliage, and by night they serenade by making sounds from special adaptations on their wings. One wing has a scraper and the other a file, so they sort of rub together like a bow being drawn over violin strings. The insects produce the sounds to attract a mate and lay eggs that lie dormant over the winter. They are attuned to the decreasing length of daylight. Growing increasingly anxious to reproduce as the season wanes, the height of their music-making is late summer. By October, they are silent.

I’m homesick for the sound—we don’t have katydids in south Florida where I live, and I miss that summer song. One of my closest friends who lives on Lake Hopatcong, however, says the sound of katydids only reminds her that summer is drawing to a close, so she’s not crazy about their music. What do you think—are you a katydid fan or foe? Do you notice their calls? I hope you do now and that you find them pleasant.

Another summer minstrel I miss is the song sparrow that nested under my bedroom window every year when I lived on the lake. To non-birders, all sparrow species look similar. Even accomplished birders refer to them as “LBJs,” or little brown jobs, because they’re generally small- to medium-sized birds with brown streaks. It requires careful attention to nuances such as habitat, plumage patterns and vocalizations to differentiate them. 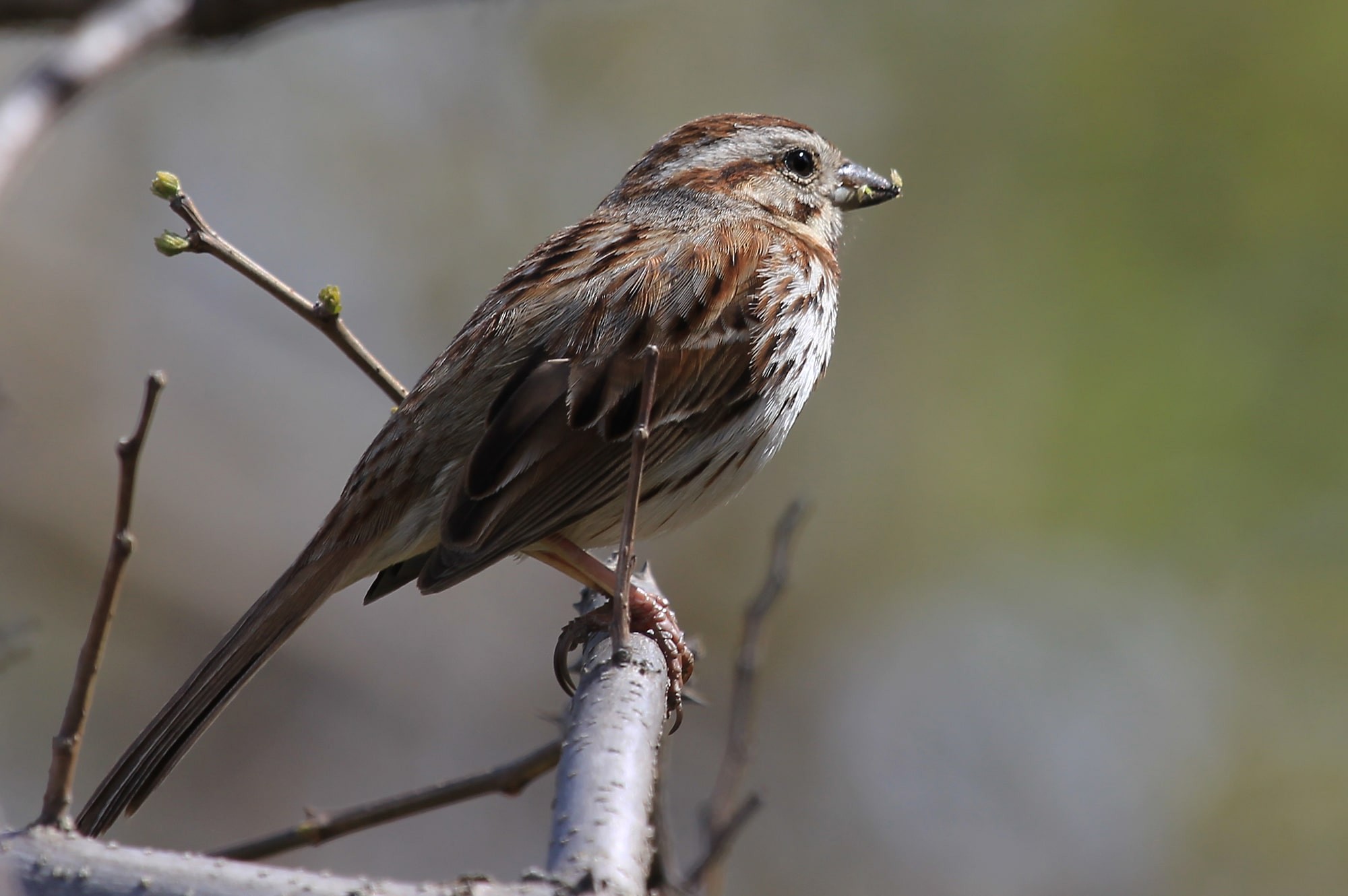 Adding to the complexity of sparrows is the variability that can occur within a species. Song sparrows occur across all of North America and vary widely across different areas of the continent. Twenty-four subspecies and 52 forms of song sparrows have been identified by scientists.

Around Lake Hopatcong, the song sparrow is—you guessed it—small and streaked with thick brown stripes. Their head is gray on the sides and has a warm, reddish-brown stripe on the crown. They have a white breast and a long tail, which they pump when they fly. Correctly identifying sparrow species based on details like these makes them highly satisfying for obsessed birders like me.

Song sparrows are comfortable around human residences. They readily come to feeders and in particular love millet seed. They nest in shrubs and love to be near water (don’t we all?).

Song sparrows can raise one to seven broods each summer and each clutch may include one o six eggs. Can you imagine? That means some song sparrows could raise 40 babies in one summer! That’s a lot to advertise and defend. Like most male birds, to advertise his territory and attract a mate, the song sparrow sings. He perches at eye level on a prominent branch, puffs out his chest, leans back and sings. And sings...and then he sings some more.

A male who is on territory and trying to attract a mate sings roughly every eight seconds, which means he may sing more than 2,000 songs in a day! Females are attracted not only to the quality of the song, but to the learning demonstrated by the males, who may know up to 20 different melodies and may improvise these basic tunes with more than 1,000 variations.

One glorious summer day, the windows of my home were open to catch the breezes flowing across Bertrand Island. My song sparrow was proudly and boisterously whistling away. As I absentmindedly put laundry away, I started whistling his tune. Immediately, the bird sang louder and more insistently. He perceived my response as another bird who was trying to cut in on his turf and was robustly telling me to back off.

I couldn’t help it. For the rest of the summer, I would whistle back and forth with him. We would perform quite a nice duet for a few minutes, but then I’d feel bad for him and stop, so he wouldn’t waste his energy defending against a perceived threat. I’d always let him win—and he’d always make me smile. Nature, including the sounds of summer, has a way of doing that.

As winter looms (and with it another potential lockdown), if you need to perk up, feel happy, and fuel your memories and dreams of summer, remember its unique sounds. I guarantee a smile will drift onto your face.