Temperatures are rising, days are getting longer, crocus blooms are poking up through the dirt, and the robins have come back…or have they?

Common folklore holds that the return of American robins is a sign of spring. Like a lot of folklore, it is rooted in both truth and falsehood.

The truth is that robins are one of the most widely distributed bird species in North America, with a range stretching from Alaska to Mexico. Familiar to most people, the birds have a bright yellow bill and a large dark eye framed by white. They have almost black heads, dark gray backs, a white throat streaked with black and a rufous red breast. According to my mom, they’re the first bird I was able to identify as a baby. 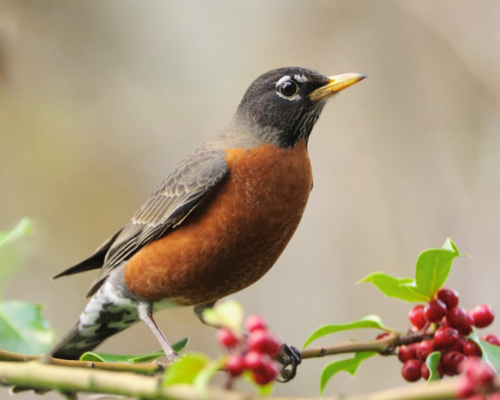 The falsehood is that robins leave in winter and return in spring. These birds are actually quite cold tolerant and, for the most part, don’t migrate. Instead, they adapt. Robins shift from a summer diet of worms and insects to a winter diet of fruits and berries. Sometimes they can become intoxicated from too many berries of a certain species, such as honeysuckle. (Hey, whatever gets you through the winter, right?)

In addition to diet, they also adapt behaviors. In winter, robins are less visible because they hide and hunker in trees, puffing up their feathers to maximize insulation. They conserve energy by not flying or hopping much. These actions make it seem like the birds have migrated away. But start deliberately looking for them and they may be easy to spot, because another winter behavior is that they can form huge communal flocks, up to a quarter of a million birds in one group.

In spring, the robins appear to “return” because they’re more frequently seen and heard. Once the snow has melted, they’re back on our lawns, pulling up worms and singing bright melodies to attract a mate. Robins can nest three broods in a season, although sadly not all the chicks make it to adulthood.

Look for the juvenile birds, that are the same size as adults by the time they leave the nest but have a different color pattern and shorter tails. Young birds can be identified by their spotted breasts and paler coloring.

So really, while the robins do return in the spring, it’s only a short commute from the woods back to the suburbs. You just can’t trust them as a harbinger of the season. More reliable signals to watch and listen for are the Eastern phoebe and spring peepers. 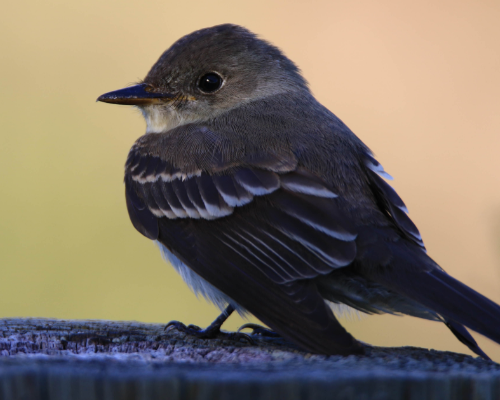 Phoebes are small, dark birds that sit upright and wag their tails on conspicuous perches that afford them a good view of the air around them as they watch for insects. These small flycatchers zip off their perch in pursuit of a fly, wasp or other bug and, after nabbing their meal, return to the same perch or another close by.
Phoebes are chubby birds with grayish brown backs, whitish fronts and a large dark head that appears squared off or peaked. They don’t migrate very far in winter, so they are one of the first true migrants to return.

A phoebe was the first bird to be banded and tracked. To this day, scientists attach tiny numbered bands to birds’ legs and monitor these marked birds to learn about migration patterns, lifespan and more.

In 1803, John James Audubon tied silver thread around some phoebe chicks’ legs and watched for their return the following year. Sure enough, several of the marked birds came back to his property in Pennsylvania.

As you are in wooded areas, especially ones near water, and with some human development such as barns or bridges (which they nest on), watch and listen for the phoebes. They announce their return with short, raspy calls of “fee-bee!” When you hear that, you’ll know spring has arrived.

Another welcome sound of spring is the nighttime call of spring peepers, tiny terrestrial chorus frogs. Only about an inch long, these beige frogs marked with a dark “X” on their backs have survived the winter hibernating under logs, in leaf piles or even hiding under loose tree bark. Once spring arrives, they’re eager to find a mate. The males make incessant calls by inflating the air sacs in their throats and forcing air out of their lungs and over their vocal cords. Older frogs sing faster than younger ones.

Undoubtedly, there will be a few more miserable weather days ahead. On those chilly wet spring days, keep an ear out for the phoebe’s croaky “fee-bee!” and the melodic peeps of frogs. Close your eyes to enjoy the sounds and smile, because you’re hearing promises that spring is here and lazy summer lake days are soon to come.