When you spend time exploring the outdoors, you are rewarded by witnessing nature reveal itself. I experience these glimpses of wild animals going about their daily lives as privileges, and though each encounter is ephemeral, the moments remain vivid in my mind’s eye. So often I’m reminded of them and call the memories up to nourish my soul when I need it.

Stuck in traffic or in a long line at the grocery store? I recall these capsules of transcendent beauty and happily surrender to them.

Imagine…a merganser floats with the current down a stream, riding rapids and bobbing through the ripples effortlessly. A sinuous otter swirls in a pothole on a quiet country dirt road, shimmying its fur to bathe in the dust. A great egret, adorned with lacy, extravagant breeding plumes on its back and vivid lime green skin around its eyes, bends its graceful neck down to turn its turquoise egg in its nest.
An eastern diamondback rattlesnake, the largest venomous snake in the Americas, sidles past me, its rattles quiet because it recognizes I am no threat. A springtime walk through an orange grove pleasantly assaults my senses: the smell of the heavenly orange blossoms, the sun’s caressing warmth, the lyrical whistle of a meadowlark, the spectacle of a lustrous pink and scarlet roseate spoonbill cleaving a perfect azure sky.

Each memory yields a moment of bliss and escape.

There is, of course, also a dark side to nature’s beauty, though it is no less
grand and fascinating to experience. When Oleg, my friend and photographer for this column, came to Florida to visit this winter, we happened on a peregrine falcon that exploded out of a marsh with a common gallinule in its grasp. It landed just in front of our car, and I quickly set up my telescope to watch it. Holding the bird in its bright yellow talons, the falcon used its sharply hooked bill to rip off the breast of the gallinule in pieces, absolutely gobbling it down.

The word peregrine means wanderer, or pilgrim, and these falcons are indeed far-ranging. They’re found on every continent except Antarctica.
They are famous for two things: becoming almost extinct and being the fastest bird in the world. In the 1970s the widespread use of pesticides, especially DDT, caused their eggshells to thin and the chicks inside to die. Thankfully, pesticide bans were put in place and efforts to reestablish the birds in the wild were successful enough that, in 1999, peregrines were removed from the endangered species list. Still, there are only 140,000 birds in the entire world, with about one-third in North America.

When flying, their usual cruising speed is about 30 mph, and when in pursuit of a bird they average 67 mph. Impressive enough, but the real drama and speed occur when they dive down to take a bird from great heights—up to 3,000 feet in the air. Called a stoop, the falcon folds its wings back and drops, reaching speeds of more than 230 mph. They hit their target with their feet to stun it, then bite through its neck to quickly kill it. 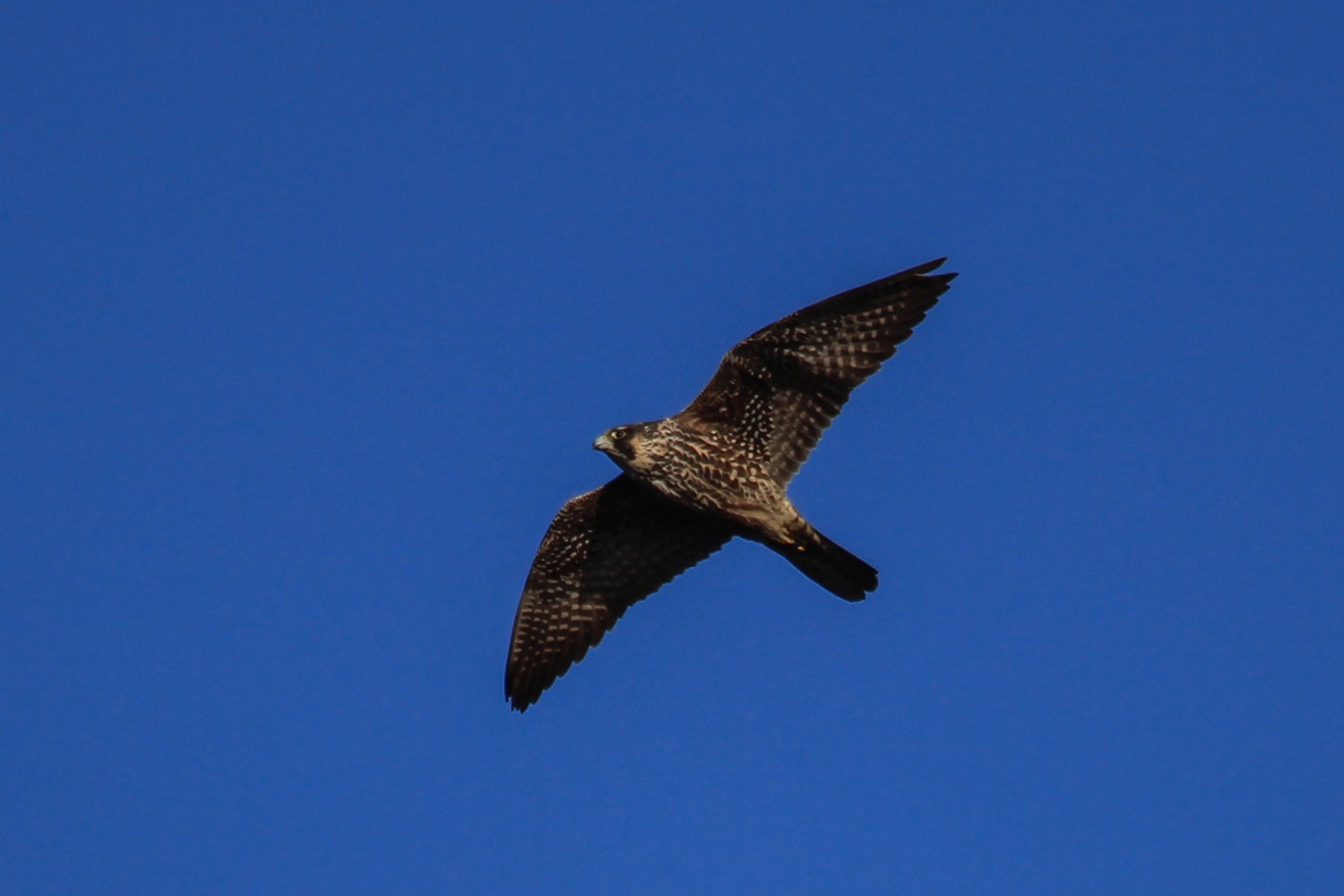 When flying, their usual cruising speed is about 30 mph, and when in pursuit of a bird they average 67 mph. Impressive enough, but the real drama and speed occur when they dive down to take a bird from great heights—up to 3,000 feet in the air. Called a stoop, the falcon folds its wings back and drops, reaching speeds of more than 230 mph. They hit their target with their feet to stun it, then bite through its neck to quickly kill it.

To see a peregrine falcon in New Jersey, your best chance is to visit the Edwin B. Forsythe National Wildlife Refuge, near Atlantic City. As you drive through the refuge, you will notice something that looks like a doghouse on stilts; that’s a nest box for the resident falcons. Closer to Lake Hopatcong, check out Merrill Creek Reservoir in Warren County or the Meadowlands.

Peregrines have also adapted well to city life and can often be seen on skyscrapers, bridges and electrical pylons. The largest falcon on our continent, they have long pointed wings and a long tail. Their coloring includes a dark gray back and a white front with dark barring on the sides. They appear to wear an almost black helmet and have heavy black sideburns.

When we watched the falcon in Florida, Oleg and I were surprised by how quickly the bird was feeding, but soon realized why. Vultures had either smelled death or spotted the feast and flew in to gather around the falcon.

At first the vultures stayed a respectful distance away, but as the falcon continued to eat, they eventually crept closer and closer. Whether the falcon had its fill of the gallinule or not, it finally flew off and left the last bits of its meal to the vultures, who hopped and hissed and pulled at the carcass. The birds finished feeding and fled, and Oleg and I went to inspect the remains. The gallinule was reduced to just two scaly legs and two wings, everything else had disappeared down the gullets of the raptors.

Nothing goes to waste in nature, and similarly, no time spent observing and enjoying nature is wasted.
This spring, get outdoors, go birding and stock your own bank of memory moments.