The Borough of Hopatcong was once the summer home of Owen McGiveney, one of vaudeville’s most unique entertainers. Born in northern England in 1884, McGiveney began acting around 1904 and by 1910 had created a vaudeville act that would bring him tremendous success for decades.

As a “quick change” artist, McGiveney amazed audiences by utilizing incredibly fast costume changes to portray multiple characters. In his most popular act, an adaptation of Dickens’ “Oliver Twist,” McGiveney would play five different roles in 10 minutes, often exiting the stage as one character and returning within seconds in a vastly different guise.

By 1913, McGiveney was appearing at New York’s Palace Theatre, America’s greatest vaudeville house, where he received equal billing with the legendary Sarah Bernhardt. Newspapers reported he nearly stole the show.

For the next two decades, McGiveney remained a headliner on the vaudeville circuit. During this period, he discovered Lake Hopatcong, becoming one of many members of the vaudeville and burlesque circuits who made the lake their summer home. McGiveney’s son, Michael, explained during a conversation that soon after arriving in America his father sought a holiday spot similar to the Lake District of northern England.

Around 1914 the vaudeville star bought a parcel of land from the development company owned by Hudson Maxim, in the River Styx area then known as Lookout Mountain (now Crescent Cove on Hudson Avenue). McGiveney camped at the lake that first summer along with his brother, Jack, and theatrical assistant, Bill Allen. 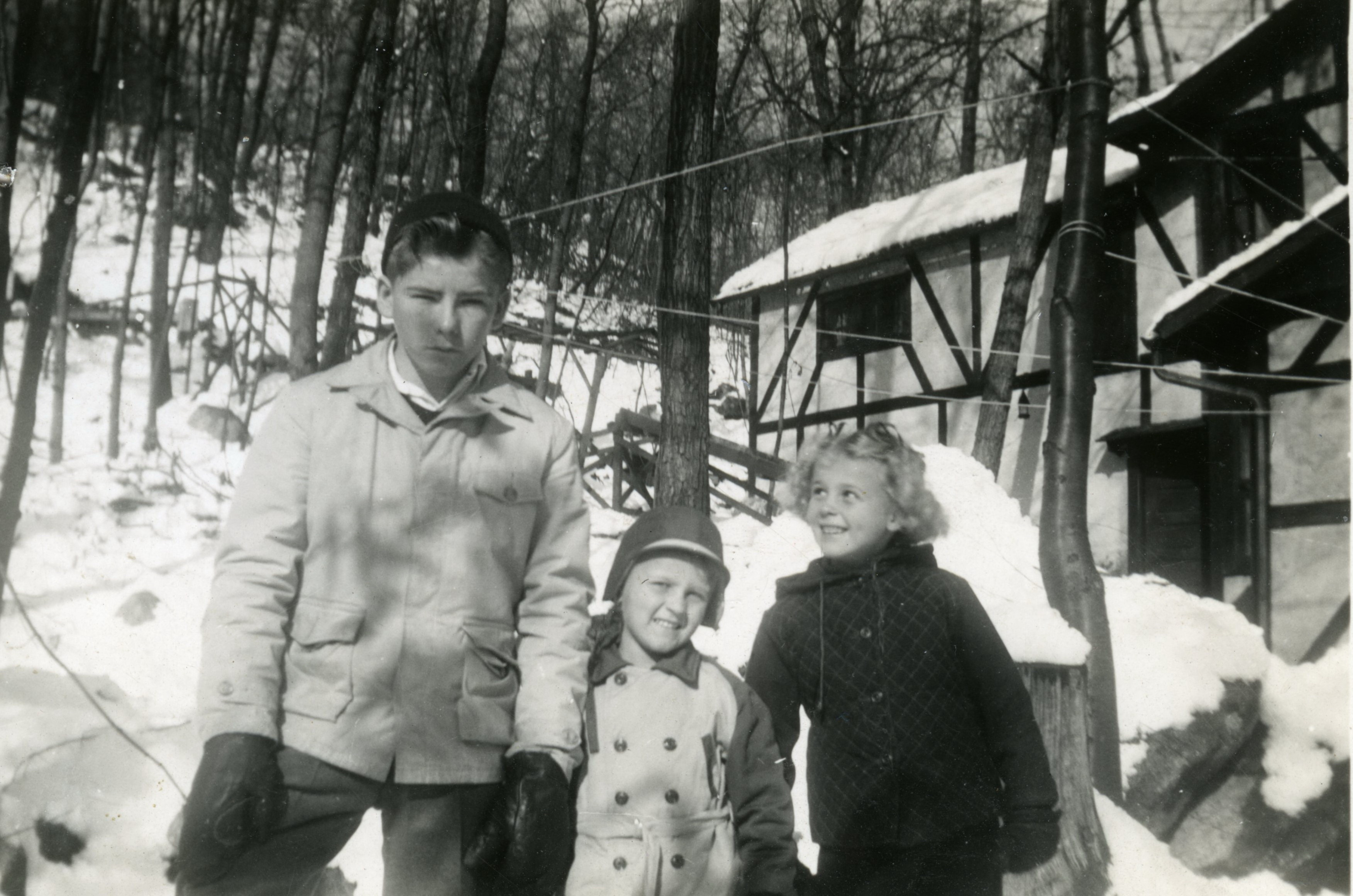 The first mention of McGiveney in the Lake Hopatcong Breeze came in 1916; his name would appear frequently over the next 25 years. The vaudeville circuit ran from September through May in this era before theatres were air conditioned. When theatres went dark in the summer, McGiveney returned to Lake Hopatcong. He was a bachelor for most of this time and often visited the lake with fellow performers.

The July 5, 1919 Breeze noted that, “Mr. Owen McGiveney and Mr. William Allen, having closed their successful professional season, have opened the Rendezvous [his bungalow at the time]. The Gibson Girl [McGiveney’s boat] has been put in commission.” In 1920, the Breeze reported “the famous Englishman of the River Styx… has finished his engagement in England and will sail for America at the end of August.” Noting that McGiveney had built a new bungalow, Owendale, the Breeze added that “good times are expected as Mr. McGiveney is still unharnessed.” The McGiveney brothers and Allen were evidently well-known bachelors at the lake. The 1923 Breeze reported that “languorous nymphs in canoes whoop for ‘Billie’ to appear, so popular is our statuesque Bill Allen among the mermaids of the Styx.” The 1924 season saw Owendale occupied by Allen and friends as the Breeze reported that “the Gibson Girl languishes sadly in her boat house awaiting the coming of Skipper Owen, who with his brother Jack is amusing the good people of England this summer.”

Readers of the August 29, 1925 Breeze learned that McGiveney had “closed his cottage to start his vaudeville tour, which started for Morristown last week and goes to Atlantic City before coming to New York for the winter.” That summer also marked the renovation of Owendale with the addition of two rooms.

Around this time, fellow vaudevillians the Mandel Brothers joined McGiveney as neighbors on Hudson Avenue. Bill Mandel bought next door and Joe Manetta (who used the stage name Joe Mandel) moved in a few doors down. The Mandel Brothers were a popular team that combined acrobatic skills with an uproarious comedy act. Summer visitors to Hudson Avenue during this period included fellow entertainers, agents and theatre folk such as George Burns, who clearly can be seen paddling a canoe in McGiveney family home movies.

During the 1930s several factors—including the booming popularity of motion pictures along with the challenges of the Great Depression—contributed to the demise of vaudeville as a popular form of entertainment. McGiveney was therefore fortunate to obtain a lengthy booking at the Chicago World’s Fair in 1933. While an excellent opportunity for him, the Breeze sadly noted that “things are slow at the lake without him.” 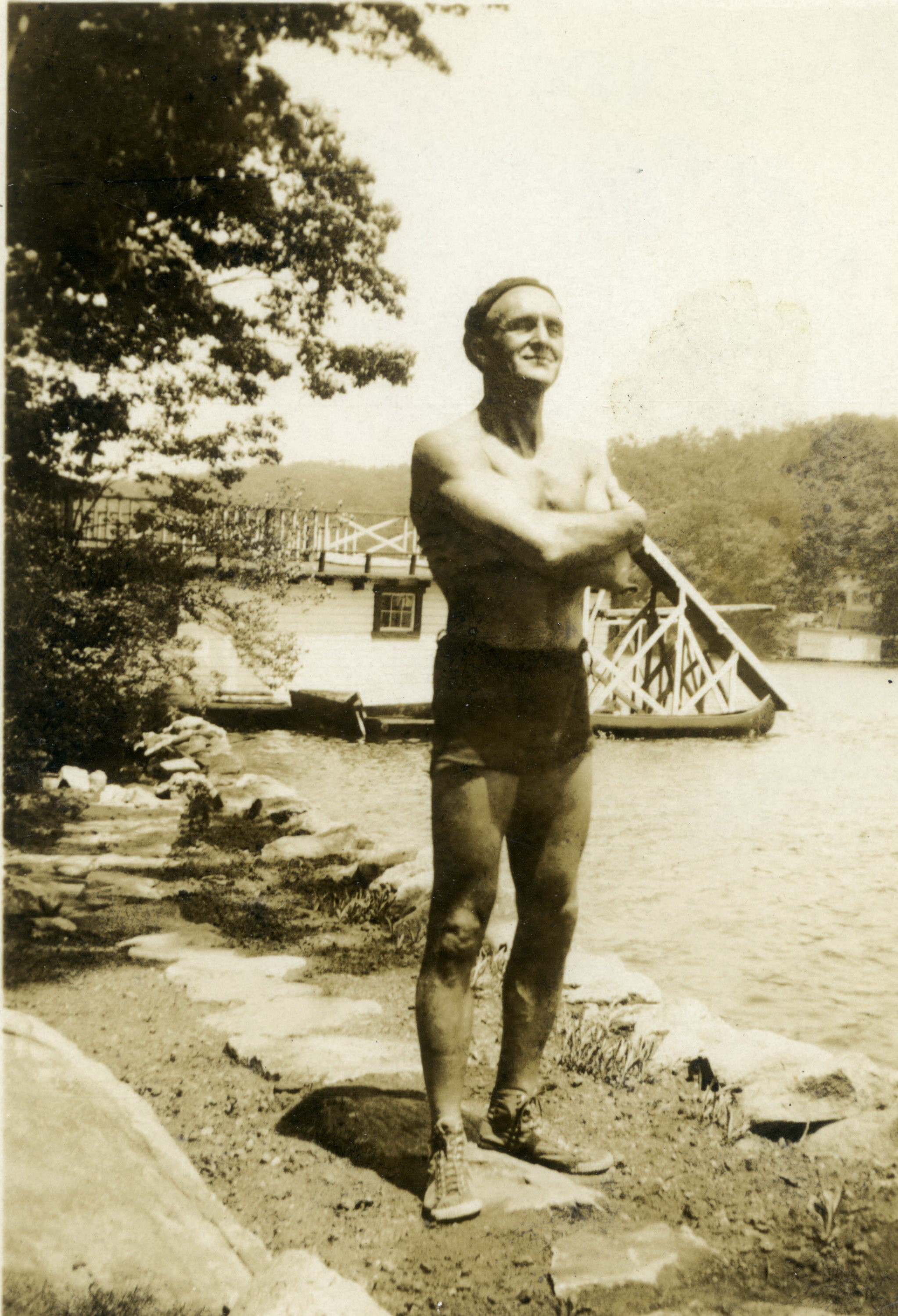 The next few years saw McGiveney spend most of his time in England where he still found steady work in British variety shows. It was during a British tour in 1936 that McGiveney married Betty Hughes, whom he had met at Lake Hopatcong where her parents operated the Hillcrest hotel and restaurant.

The McGiveneys spent much of the mid- and late 1930s touring the music halls in England. Betty joined the act as an assistant and driver.

(Though McGiveney loved to drive his boat on the lake, he never drove a car.) After returning to the lake for the summer of 1937, the Breeze gushed in September that they “have been especially happy this summer, and in a short while expect to be proud parents.”

Although the winds of war were sweeping across Europe, McGiveney was nevertheless able to find employment in England, securing a two-year contract in 1939 to play the British music halls, where he was still in demand. His wife, pregnant with their third child, returned to America in 1940 to spend the summer at their lake house and be near her parents, who had moved to Netcong. The June 29, 1940 Breeze reported that, “a son, Owen Michael, was born to Mr. and Mrs. Owen McGiveney on June 16 at All Souls Hospital in Morristown. Both mother and baby are doing nicely.”

Owen McGiveney would remain in England throughout the war, with travel restrictions preventing his family from joining him until they sailed on the Queen Mary (then serving as a troop transport) in 1945.

With the war over, producer Ken Murray brought McGiveney to Los Angeles in 1946 to appear in the wildly popular stage variety show “Blackouts.” Murray had worked with McGiveney previously and considered him one of vaudeville’s greatest stars. In addition to several years of steady employment in “Blackouts,” McGiveney’s move to Los Angeles opened up an entirely new career as a character actor in films. It also led the McGiveneys to finally part with their Lake Hopatcong cottage in 1947, although Owen would visit the lake again, the final time being in 1954.

In Hollywood, McGiveney’s connections from vaudeville days and his ability to play an English gentleman brought him plenty of work. He can be seen in such classic films as “Showboat,” “Pat and Mike,” “Brigadoon,” “My Fair Lady,” and even “Snow White and the Three Stooges.” In addition, he appeared on numerous television shows including “Perry Mason,” “Bewitched,” “The Outer Limits,” “The Monkees,” “77 Sunset Strip,” and “The Mickey Mouse Club.” McGiveney continued to work as a character actor until the age of 81. He died in California in 1967 at 83.

McGiveney encouraged his son, Michael, to learn the quick change act, and he began performing it in the 1950s. While becoming a successful lighting designer, production manager and producer, Michael would continue to perform the quick change act over the next 50 years on shows like the “Ed Sullivan Show,” “Milton Berle Show,” and “The Tonight Show Starring Johnny Carson” and at bookings around the country. Meanwhile, he also designed lighting and served as production manager for touring ice shows with Peggy Fleming and Dorothy Hamill, magic shows with Doug Henning and Harry Blackstone, and concerts with Andy Williams, Johnny Mathis, Julie Andrews and Bernadette Peters. While working on the Fleming ice show, Michael met his wife, Judith, a costume designer. After Michael retired from Disney Imagineering, the couple moved to Coeur d’Alene, Idaho, where they still reside.

Michael McGiveney attended the Hudson Maxim School for one summer when he was 5, but his older siblings did go to area schools. His sister Maura was an attendee at Hudson Maxim and brother Peter (later known as Gene) at Roxbury High School. Maura became a successful film and television actress seen frequently in the 1960s and 1970s, while Gene, who as a young man helped his father with the act, had a successful accounting career. Gene lives today in California and Maura has since passed. Owen McGiveney’s wife, Hopatcong’s former Betty Hughes, died in 2006 in Coeur d’Alene.

The Lake Hopatcong Historical Museum has maintained a close relationship with Michael McGiveney for many years. He and Judith traveled to Lake Hopatcong in 2013 for a program highlighted by a demonstration of the famous quick change act.

In 2020, Michael contacted the museum and donated photographs, programs, posters, news clippings and a wealth of materials covering his father’s entire career, including photographs of summers at Lake Hopatcong. The Owen McGiveney Collection is an amazing addition to the museum’s archive, capturing a very special period in Lake Hopatcong’s history.

Owen McGiveney at his summer cottage in Crescent Cove, circa 1930s.

McGiveney on the marquis of Empress Theatre in Seattle, 1915.

A 1935 poster featuring McGiveney at the Bolton Theatre in the UK. Right: McGiveney s Angus in “Brigadoon” with Gene Kelly, 1954.