Is it really possible that it has been more than 35 years since Bertrand Island Park closed? Of all the attractions that have existed at Lake Hopatcong, none was more beloved than this amusement park.

Class trips and family outings to the park were much anticipated events for generations of children. The park was the first place many local youngsters were allowed to go without parents, and for countless area teenagers it provided a memorable summer job.

A beach created at Bertrand Island in the early 1900s quickly became a popular swimming spot. The first amusements at the site appeared after the Morris County Traction Company extended service from Landing to the beach in 1910 in order to entice riders on weekends 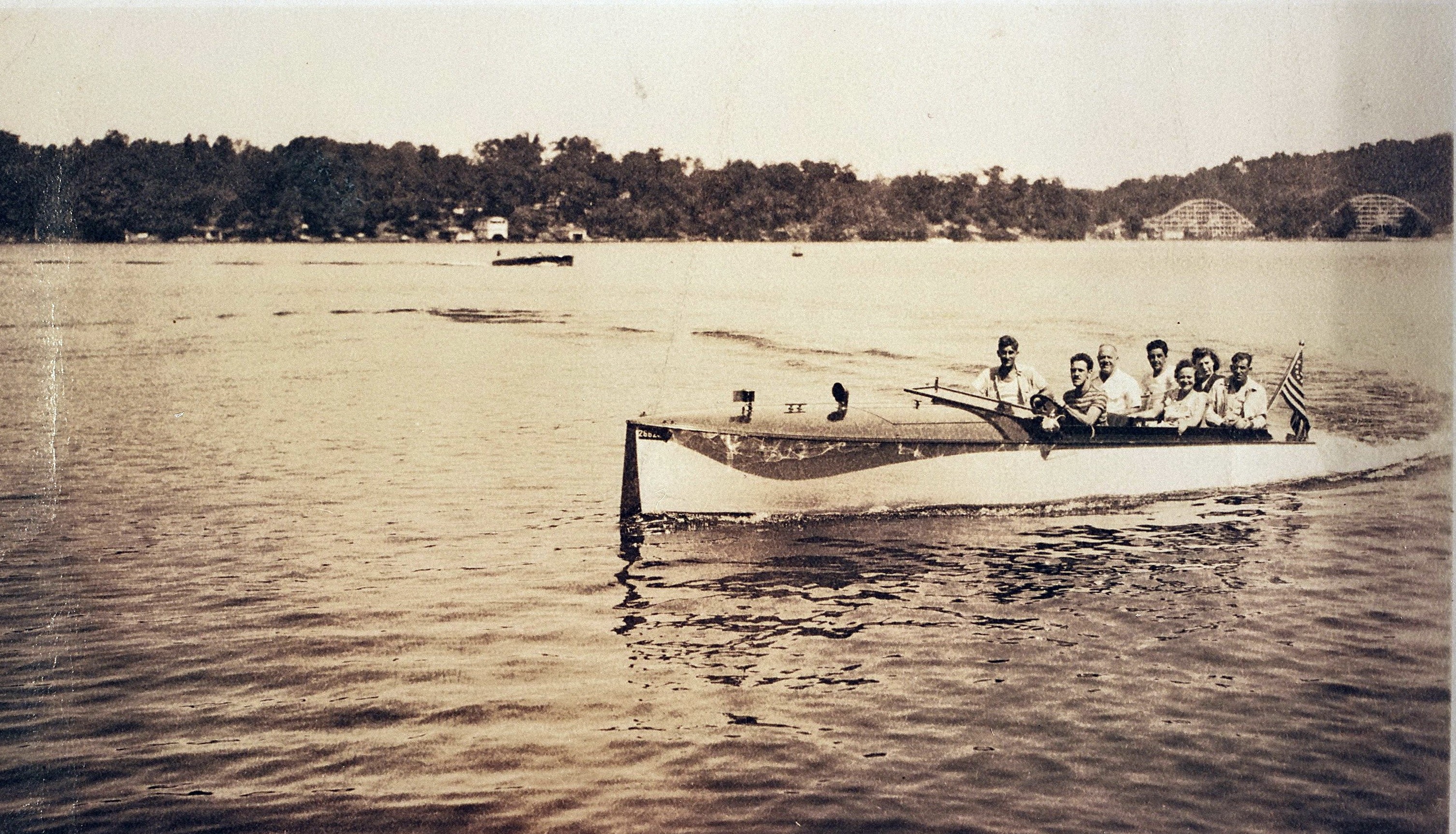 Louis Kraus, a teacher from Newark, along with a silent partner, bought most of Bertrand Island in 1919. Kraus quickly realized the property’s potential as an amusement area and, over the next five years, added a boardwalk, electric lights and many of the pavilions and amusements that would remain for the park’s duration.

Kraus rented space to concessionaires who operated the rides and games. Under his leadership, Bertrand Island’s popularity grew.

The 1920s saw the addition of a Ferris wheel, roller coaster, dodgem cars, aeroplane swing, the Old Mill (part tunnel of love and part water thrill ride, which would later be named the Lost River), sightseeing boats and more.  The famous Illions Supreme carousel arrived in 1937 and other rides and games were added over the years to keep up with fads and trends. 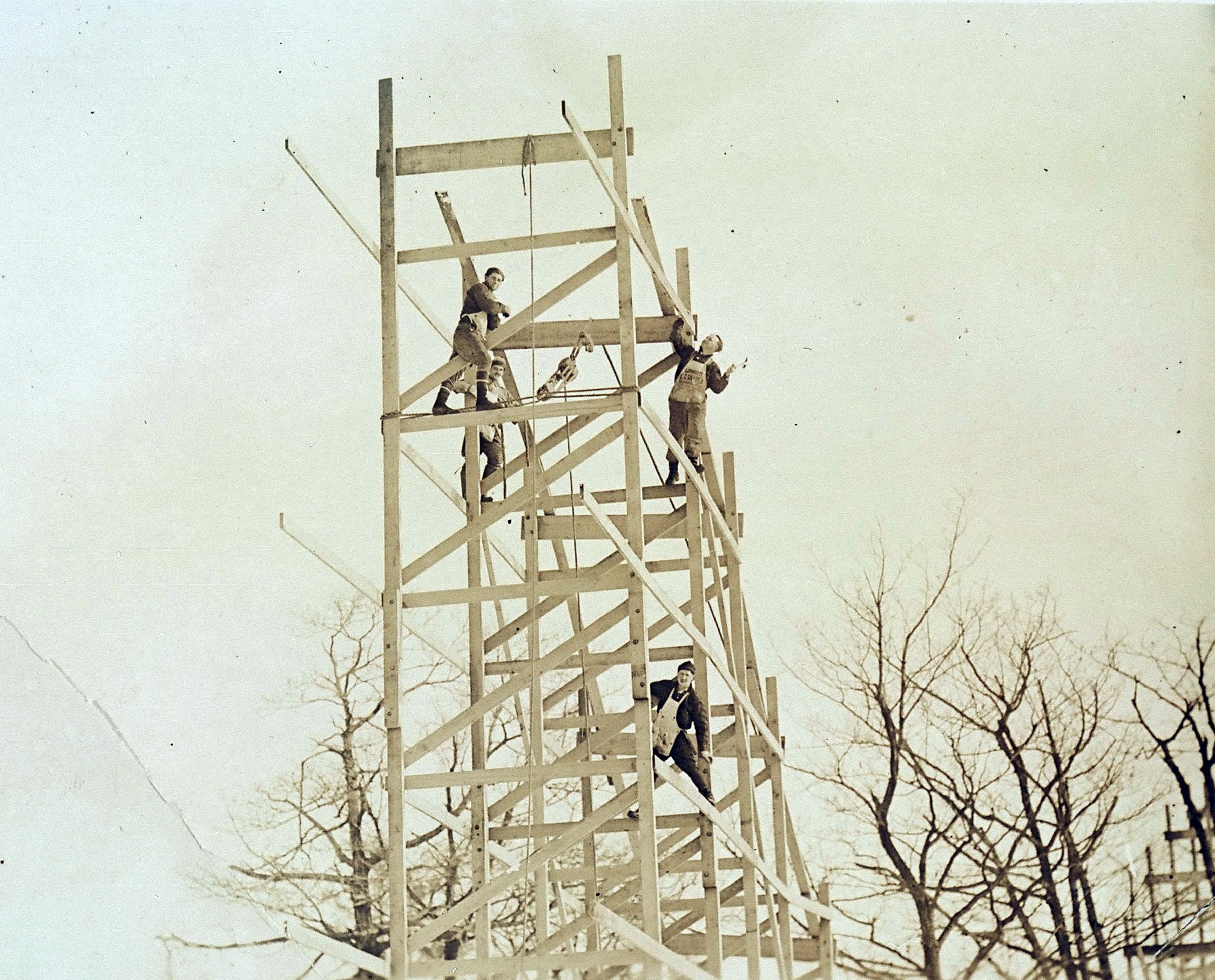 Beauty pageants became popular events at the park beginning in the 1930s. Dancing was also a favorite diversion and the park’s June Rose Ballroom (later the Villa) hosted many of the area’s top bands.

In 1948, still feeling the effects of the Depression and the war years, Kraus sold the park to concessionaires Lorenzo D’Agostino, his son Ray D’Agostino and Larry Donofrio. Recognizing the value of Kraus’ experience, the new owners asked him to help manage the park, which he did until his death in 1955. Ray D’Agostino became the sole owner in the 1960s and would remain so until 1978.

In many ways, the 1950s and 1960s were the golden years at the park, and it was filled with locals, summer residents and daily visitors to the lake. Bertrand Island was a favorite destination for school, business and church outings. The park seemed to fill a niche at Lake Hopatcong. 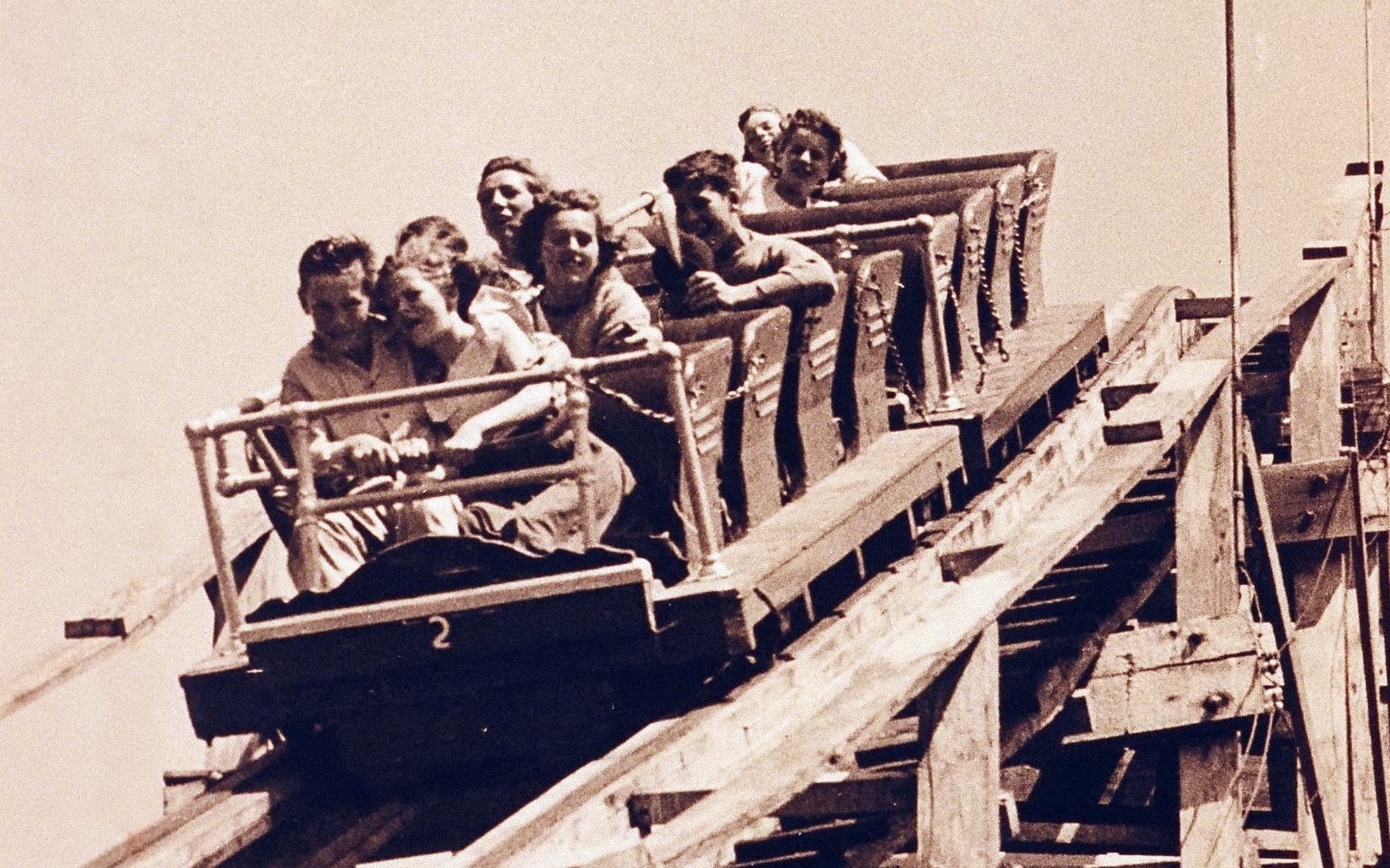 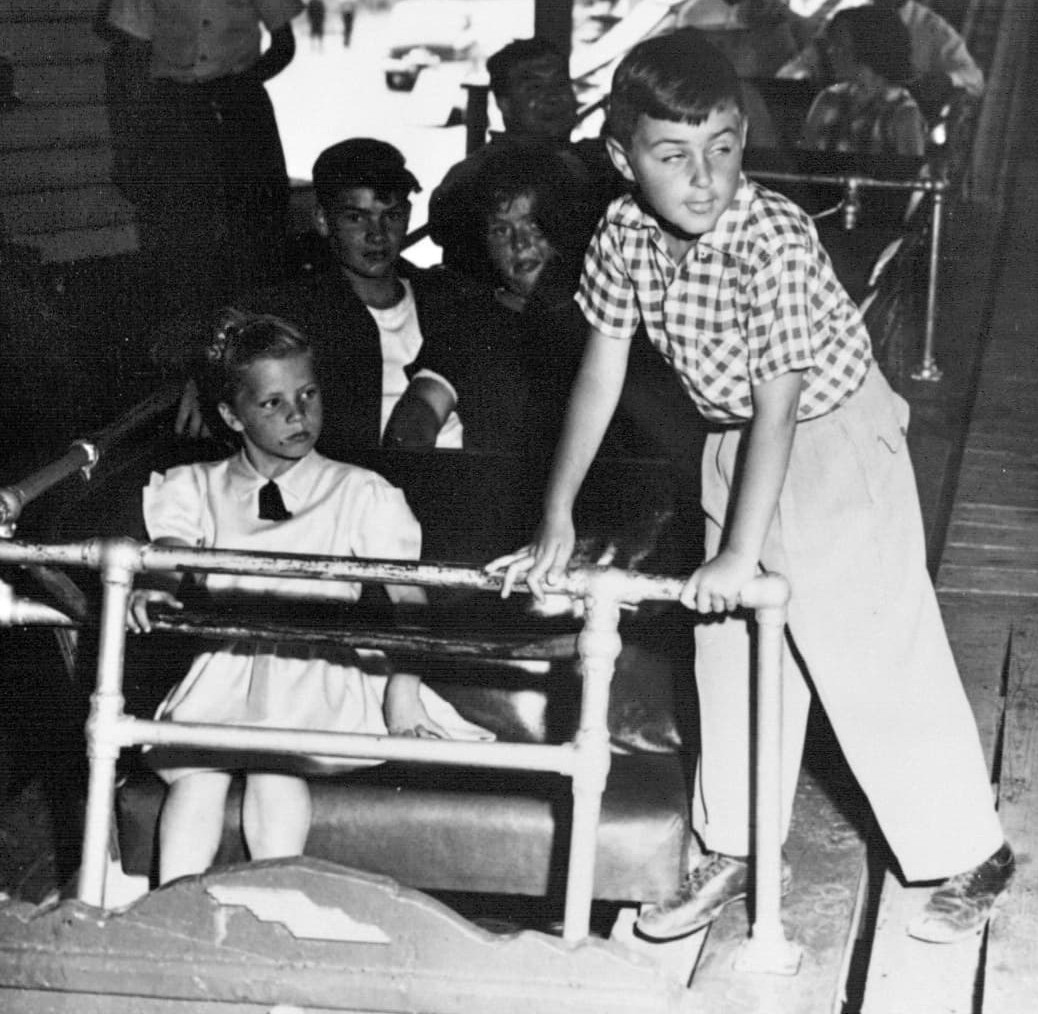 Following the appeal of discount nights, which had been introduced during the Depression, in 1950, Mondays and Thursdays were deemed “Nickel Nights.” These provided a tremendous boost in attendance and forever endeared the park to thousands of youngsters who arrived with a dollar or two and kept busy all evening as every ride cost just five cents. Kiddieland, another popular postwar addition that featured children’s rides, debuted in 1951 to much success.

But America was changing and by the 1970s Bertrand Island faced competition from larger parks as well as decreased attendance with the slowing baby boom. Other New Jersey icons had already succumbed, with Olympic Park closing in 1965 and the venerable Palisades Park shutting down in 1971.

Larger amusement operators were not interested in acquiring Bertrand Island as the land was insufficient for expansion. Land values around the lake soared during this period, as did real estate taxes and insurance costs. The existence of an old-fashioned family amusement park at Lake Hopatcong was quickly becoming unfeasible. 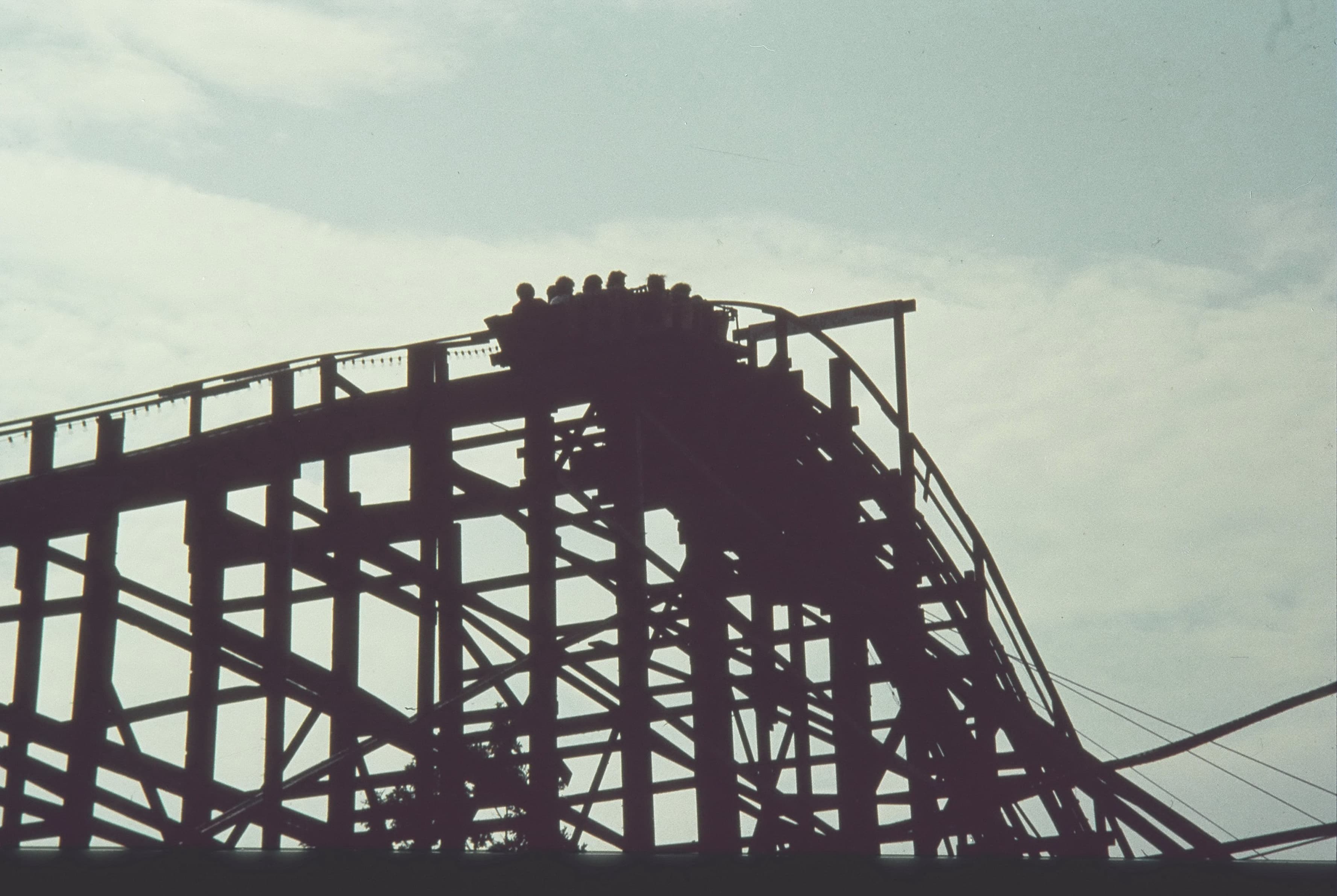 In 1978, after 30 years in charge, Ray D’Agostino finally sold. While the new owner initially continued to operate the park, development of the land was foremost on his mind. Bertrand Island’s long run came to an end on Labor Day, 1983. Development would be delayed by water and sewer issues for many years. Lakeshore Village was finally constructed on the site in 2002.

Though 35 years have passed, memories of the park remain very much alive. The wooden roller coaster, spectacular carousel, Lost River, Boomerang (a spinning ride, which would never be judged safe today) and penny arcade are all indelibly etched in the minds of so many residents of north Jersey.

In 2008, the Lake Hopatcong Historical Museum placed a monument at the site of the park’s former entrance on Bertrand Island Road.

Of all of Bertrand Island’s rides, none is more remembered today than its roller coaster. In fact, its construction put Bertrand Island Park on the map as an amusement park.

Among the first rides of its kind in the region, the coaster was built over the winter of 1924-1925 by Philadelphia Toboggan Company, the leading designer and builder of roller coasters from the early 1900s until the mid-1970s. The Bertrand Island coaster was the 46th constructed by the company; hence to coaster enthusiasts, it is known as PTC 46. 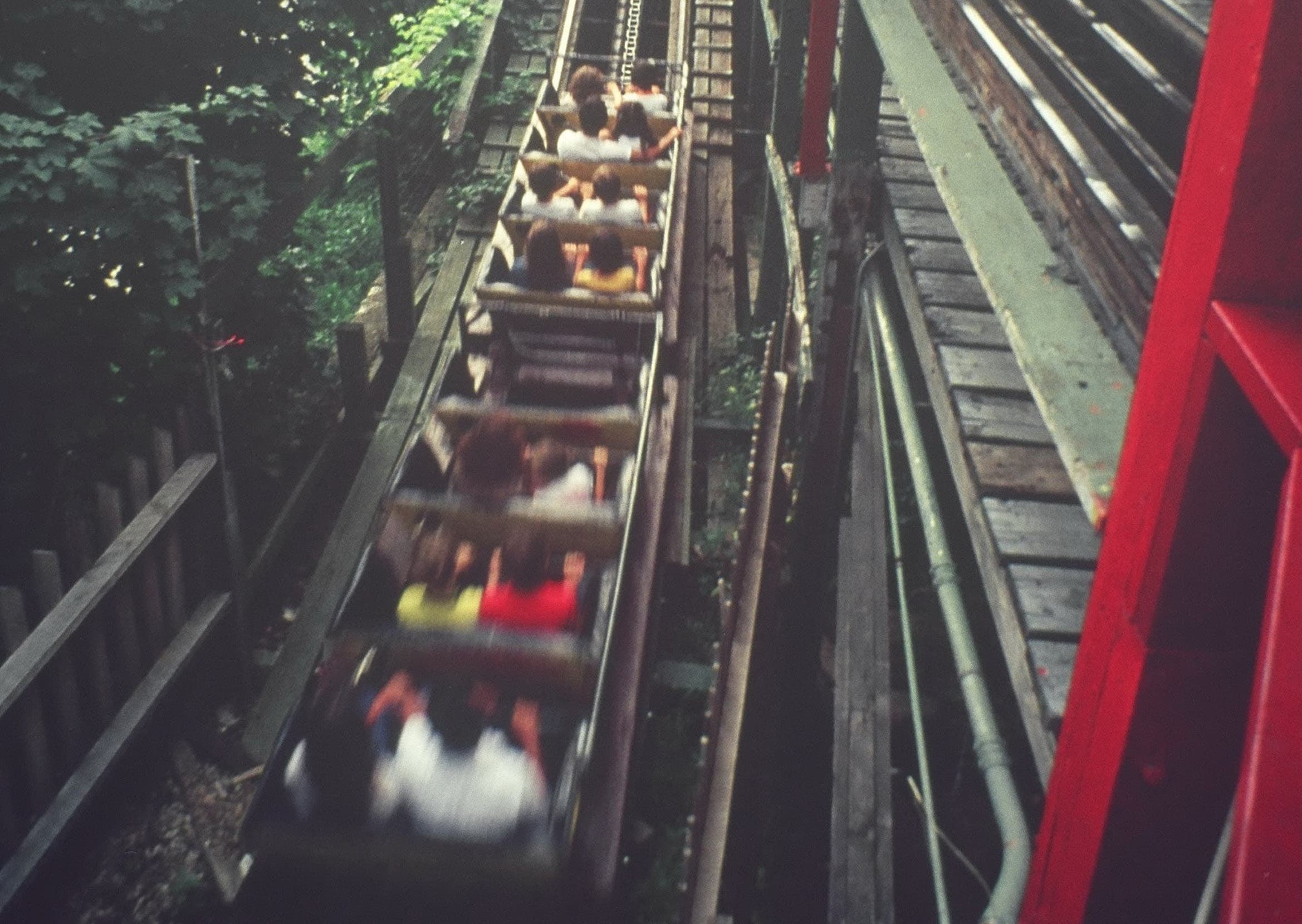 The April 4, 1925 issue of the Lake Hopatcong Breeze captured the excitement of the ride’s opening by reporting that it “is a giant affair, the largest of its kind... Propelled only by gravity and momentum they travel on their thrilling course of dips and sudden rises, breath taking glides and dizzy turns over nearly a mile of track back to their starting point.”

The new ride was not given a specific name but in the ensuing years was sometimes known as the Cyclone and later as the Wildcat. By any name, it was an immediate hit and brought in the park’s largest attendance to date, with long lines waiting to ride.

The roller coaster remained a fixture until the park’s closure following the 1983 season. This does not mean that the ride was without controversy. There were several fatalities over the years, usually the result of a rider standing despite warnings against such conduct.

A fire on the coaster in 1970 forced its closure for the season. In 1973 one of the roller coaster cars bumped into another that had gotten stuck on a hill, resulting in injuries to 19 schoolchildren.

Through it all, the ride remained one of the park’s most popular attractions. Though the shaky wooden structure terrified some, there were many who simply could not ride the classic coaster enough.

While the Bertrand Island coaster was demolished after the park’s closure, Philadelphia Toboggan Company is still in business today. A major manufacturer of roller coaster cars, the company also renovates existing wooden coasters. It operated from the same factory in the Germantown section of Philadelphia from 1904 to 1971 and is now located in nearby Hatfield, Pa.

Many of the coasters designed and built by Philadelphia Toboggan Company are still running, including a few in our region. PTC 41, built in 1924 and now known as the ThunderHawk, is similar in style to the Bertrand Island coaster and is in service at Dorney Park in Allentown, Pa., having been restored by Philadelphia Toboggan Company in 2016. It is the eighth oldest roller coaster in the country and 10th oldest in the world. Also, still in operation is PTC 61 at Lake Compounce in Bristol, Conn. Built in 1927, the coaster is known as the Wildcat and was completely renovated in 2017.

If you are feeling nostalgic and crave the thrill of a classic wooden coaster like the one from Bertrand Island, there’s still time for a summer road trip!

Growing up in NJ during the 1960s-1970s, Bertrand’s Island was THE ultimate family destination for several hours of excitement and fun. It was always crowded and there was so much to do to entertain any age, young, old, and in between.
It was a sad acknowledgement that there wouldn’t be a Bertrand’s Island type of amusement park in our move to Ohio.
On a trip back to NJ in the late 1990s, we discovered that such a colorful, wonderful, and energetic atmosphere of “a million things to see and do” was totally a figment of a bygone time to cherish as a fading memory.