As we go to press, the Lake Hopatcong Yacht Club is getting ready to follow a 111-year-old tradition and close the building for winter. The pipes will be drained, the furniture moved inside and the building shuttered for some six months. Except for a brief trial of staying open year-round in the 1960s, it has been this way since the founding of the club.

While times and the community that the club serves have greatly changed over the years, the yacht club remains seasonal, harking back to when Lake Hopatcong welcomed crowds of visitors in the summer and shrank back to a remote destination until summer returned. Founded in 1905, the Lake Hopatcong Yacht Club initially operated from the grounds of “Wildwood,” the home of first Commodore R.L. Edwards in Hopatcong. Intending to build their own clubhouse, members approved the purchase of some 100 feet of lakefront property on Bertrand Island in 1907 at a cost of $2,500.

The location offered one of the lake’s finest views. Original plans called for a Colonial-style building with large porches on the first and second floors, a grill room, billiard room, parlors and an enormous ballroom with seating for over 700 people. Quickly recognizing the property was insufficient for its plans, the club purchased adjoining land in 1908 for an additional $2,500.

Initial plans were to have the new building ready for the 1909 season, but this proved to be more complicated than anticipated as meetings were held with little or no progress, several officers and trustees resigned and money was a constant challenge. The club would ultimately go through three sets of architects, several rounds of price quotations and multiple plans for financing.

In March of 1909, the club received a quote of $7,348 based on the original construction plans. Having expected a significantly lower cost, the board of trustees directed the building committee to limit construction to an auditorium and two reception rooms at a cost not to exceed $3,500. 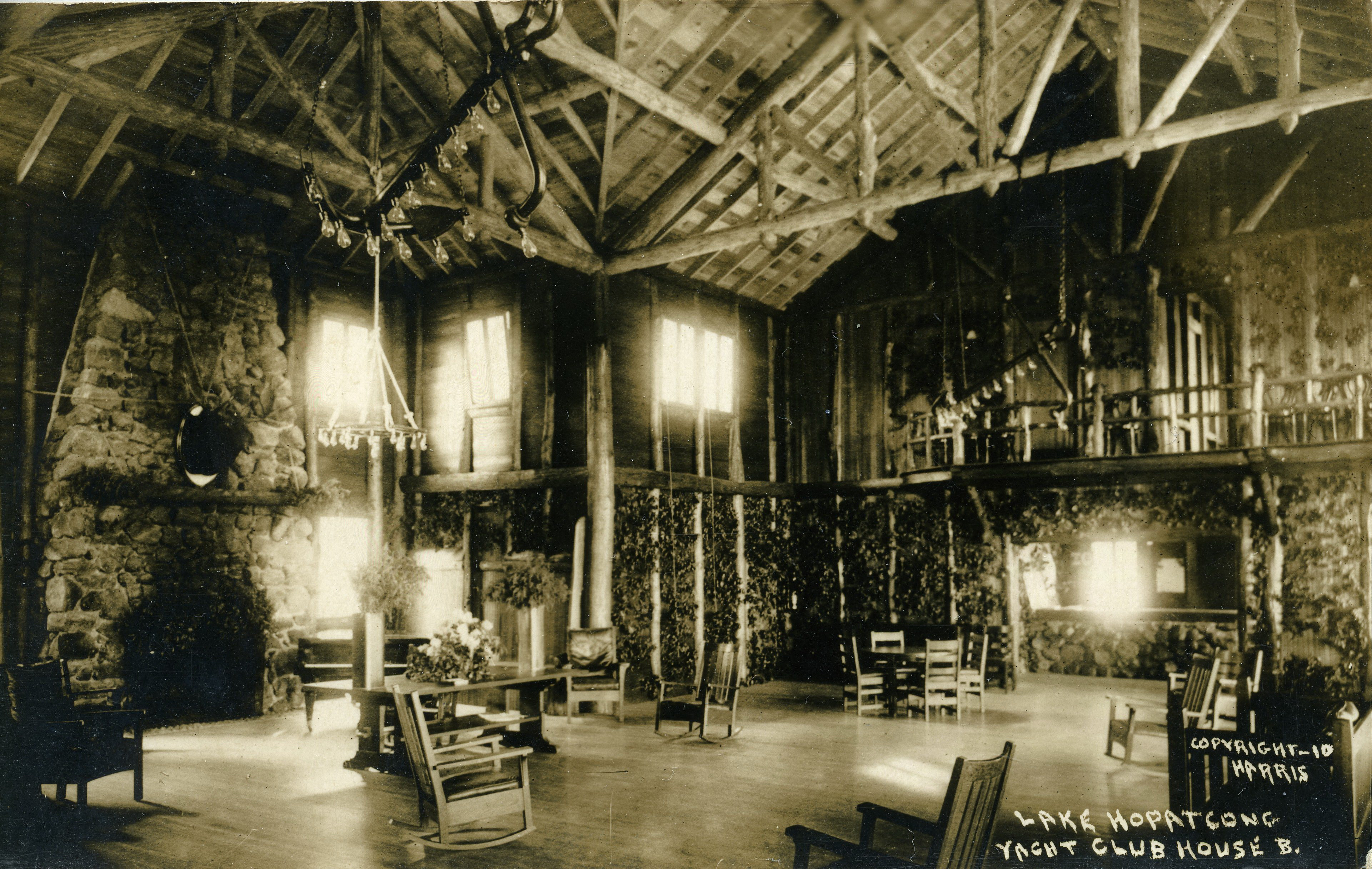 After a second set of plans proved insufficient, a third concept was presented by Lewis F. Pilcher, a noted New York City architect who had joined the building committee in July. Pilcher, the son of Dr. Lewis Pilcher, who owned Eagle’s Nest cottage in Davis Cove, would later serve for many years as state architect in charge of all buildings erected by the state of New York.

Drawing upon his experience as a professor of art at Vassar College, Pilcher presented a new design that combined a Colonial Georgian exterior with an Adirondack-style interior.

The board quickly approved Pilcher’s design and requested that he obtain bids. By this time, club leaders had concluded that a cost of $7,000 to $7,500 would be more realistic. Builder George E. Reeves’ bid of $7,100 to build the structure was the lowest of four received in September 1909.

Construction costs were partially offset by the donation of timber from several club members’ properties, including a significant amount from Vice Commodore P.B. Bird’s home on Point Pleasant Road. Most of the lumber was hauled across the ice to Bertrand Island over the winter.

Typical modifications during construction included adding stone for the fireplace and plaster for the bathrooms. Along the way, the board scrapped plans for a second-floor bathroom. Building a dock added $175 and installing a flagpole cost $150. In addition, water tanks, a cesspool, switchboard, grading, walkways, pumps, a power plant and plumbing fixtures brought the total to $9,860. Taxes were assessed by Mount Arlington at $100 per year.

The new clubhouse featured wide porches on the first and second floors and was comprised of two wings, each with spacious rooms that included a grill, committee rooms, card rooms, retiring rooms, smoking room, kitchen, pantry and dressing rooms for performances. A movable stage could be placed in the large ballroom, the interior of which was finished with rough-hewn timber and featured an enormous stone fireplace built of local rock. 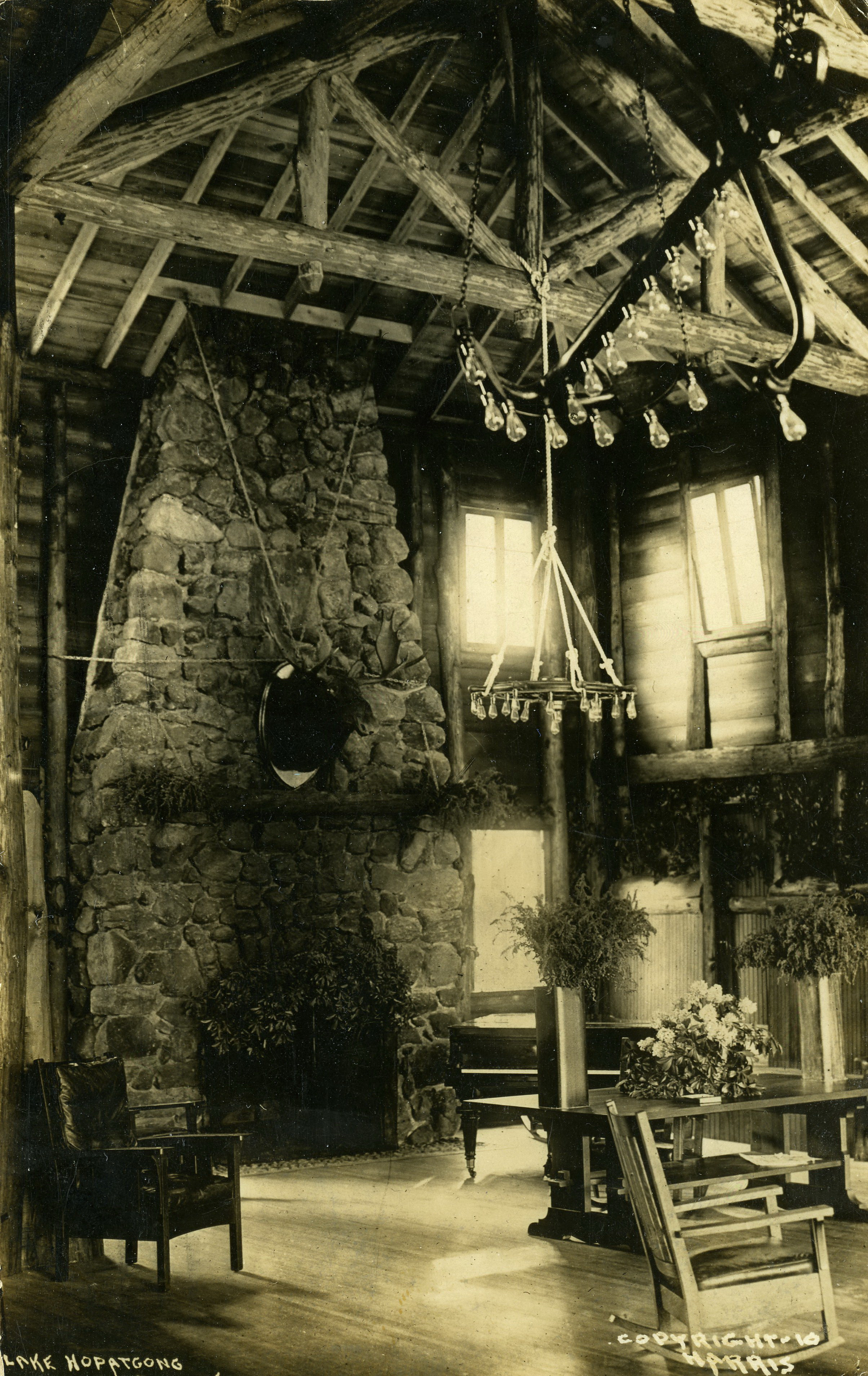 The fireplace was used actively for decades and was enough to take the chill out of the room during the early and late seasons while giving the interior a warm glow. Since electricity was still not available locally, the clubhouse had its own electric plant. For many years, the club was dependent on a water tower that stood just behind the building and can be seen in some early photographs.

The Lake Hopatcong Yacht Club held a formal opening on July 9, 1910, and the clubhouse soon became a center for lake activity. The club would probably have faded into obscurity over time like earlier groups on the lake had it not built the clubhouse and sunk permanent roots. Following the tumultuous years of planning and building, the July 16, 1910 edition of the Lake Hopatcong Breeze reported that through the building of the new clubhouse “the Yacht Club has been born again and taken on a new lease on life.” The building remained basically untouched until the 1930s. As a family club, the Lake Hopatcong Yacht Club had initially banned the sale and consumption of alcohol. When Prohibition ended in 1933, there was a move to change this policy to compete with the night clubs and bars opening at the lake.

Without the sale of alcohol, many members felt the club would never restore its membership numbers, which had shrunk drastically during the Great Depression. After a contentious vote in the late 1930s, the bylaws were changed to allow alcohol, prompting the resignation of several members.

Volunteers built a bar by enclosing the porch on the eastern side of the clubhouse and building a small addition. Over the years, this renovation was found to be inadequate and, as the 1960s loomed, the club looked to address this situation.

Following the 1961 season, a professional architect and builder were hired to remove the portico on the east side of the structure and create a modern addition that included a new and larger bar with a dining area, new locker and shower room, powder room, enlarged kitchen, and additional basement and kitchen storage rooms. It was at this time that serious thought was given to using the clubhouse year round. The installation of a heating system—which included a future ability to add air conditioning— allowed the club to utilize this part of the building on a limited basis throughout the entire year.

During the 1962-1963 off-season, the clubhouse hosted parties for Halloween and St. Patrick’s Day. Winter use proved to be costly, however, and the club limited its expanded season to Halloween parties for a few years in the 1960s. This topic was revisited over the years, but the club maintained its seasonal status, generally closing from October to April.

In recent years, with the porch in need of substantial restoration, club leadership and members started looking into ways to return the upper porch to functionality. Early photos document the popularity of the upper level with its outstanding vistas of the lake, but maintenance, safety concerns and building code issues left this area unusable for decades.

Club leadership, backed by club membership, authorized and supported the second major renovation in the history of the building, which had been placed on the New Jersey and National Register of Historic Places in 1999. Work that began in fall 2019 and was largely completed for the 2020 season brought the clubhouse closer to its original look by restoring the symmetrical shape of the lower porch, reopening the upper porch and making the building more functional internally.

While the clubhouse of the Lake Hopatcong Yacht Club is looking in great shape, like many centenarians it will soon be taking a nap and awakening to welcome summer 2022 at the lake.

An aerial view of the Lake Hopatcong Yacht Club after the 1962 renovations.

The interior of the Yacht Club on its opening in 1910.