“Railroaders” were once revered in New Jersey and around the nation – the workers whose jobs ranged from conductors to ticket agents and, of course, the engineers, who were written about in heroic terms in newspapers of the early 19th Century.

Morris County’s Office of Planning and Preservation has compiled an on-line collection documenting the names of Morris County’s “railroaders,” including vintage photos, news clippings and biographical data from the very early days through modern times. In some cases, only their names and brief information are listed because little else is known about them.

However, Morris County continues to search for more information and invites the public to help document these long-gone “railroaders.”

“I used to be a railroad man and I'm damn proud of it, too. I did more work in a working day than any two men could do …” – from “Stanton Station” by Elliot Lu

“The ‘Iron Horse’ changed the national landscape in the 1880s, both economically and physically. This list attempts to pay homage to the locals who made the railroad possible in Morris County -- those who built it and those who worked it,” said Jan Williams, a historian with the Office of Planning and Preservation.

“Major rails were built to service the Morris Canal and much like “canalers,” railroaders appear to have been a generational profession with fathers, sons and grandsons working side by side,” said Joseph Barilla, Director of Planning and Preservation.

“Railroads have shaped the development of the county and have proven to be of economic importance for generations of Morris County residents. From supplying our industrial facilities in the 1900’s to providing a present day transportation source to the offices of Manhattan, the railroads were and are a key accessory to the employment of many,” Barilla added.

In Morris County, the term “railroader” became a catchall phrase for railroad employment, from those who worked on the railroad and at the depots to conductors and engineers. The 19th Century was a time in America when the railroads served as a commercial boon for the towns they served, whether it be commuter trains or the freight lines 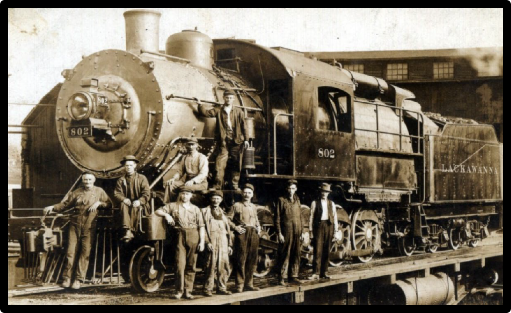 Railroads allowed for settlements in the west, and the growing railroad network allowed wealthy northerners to winter in the south, establishing Florida as the place for “snow birds” more than a century ago.

It is an important aspect of Morris County history worth documenting. Railroads were once a staple in Morris County life. They provided shopkeepers with goods, afforded speedy mail delivery and, most importantly, were a key source of employment. Railroads served as a companion tool for the Morris Canal; eventually overtaking the canal as a favored transportation mode for ore, goods and people.

The collection is by no means complete, and anyone who wants to contribute to it is welcome to contact Jan Williams at jwilliams@co.morris.nj.us.