It still works! The 96-year-old Lake Hopatcong State Park Fountain, where tourists frolicked nearly a century ago and locals continued to splash around until 20 years ago, was turned on briefly this week as restoration planning got underway.

While not able to reach its geyser-like heights of yesteryear, the wellspring that flowed was impressive enough. Check out the video. “We have tested it a couple of times in the last decade to try to determine if a project was possible, but this was the first time it was turned on in some time and actually looked better than we expected,” said Marty Kane, President of the Lake Hopatcong Historical Museum and Chair of the Lake Hopatcong Foundation.

Only a trickle flowed in past tests, but this time the fountain, Roxbury Township at Hopatcong State Park, was turned on to allow a full flow for the first time in many years. “There was one small leak noted in the outer perimeter, a possible cracked pipe some 25 feet from the fountain, and the fountain itself has some issues not allowing the water to reach its original height. But, overall the test yesterday was a pleasant surprise and both the State Park staff and our folks went away very happy,” Kane explained.

Last month, the Morris County Board of County Commissioners approved a $36,800 historic preservation grant recommended by the Morris County Historic Preservation Trust Fund for the museum to develop pre-restoration construction documents for the fountain. The planning involves exterior restoration, repair of the plumbing system, and addressing the hydrology and filtration of water from Lake Hopatcong to the fountain.

The museum had received a previous grant of $45,381 from Morris County in 2014 to assess the fountain’s functionality. Among the museum's engineering team, headed by historical architects Connolly & Hickey, are students completing their senior project at Stevens Institute of Technology. They visited the fountain Monday, and with the support of personnel at Lake Hopatcong State Park, the fountain was turned on so the students could take measurements and check the flow rate.

Kane notes the historic fountain, where visitors often cooled off while visiting the nearby beach, was not created for aesthetic purposes.

It was built in 1925 to resolve a huge social and political divide in the region that came to a head when the Morris Canal, once the commercial lifeline for transporting coal and other goods across northern New Jersey, was closed. For years prior, hotel operators, business owners and summer residents of Lake Hopatcong battled with mill owners and others downstream along the Musconetcong River, over how much water flowed from Lake Hopatcong.

The flow into the river was controlled by a damn and locks feeding the canal, and the lake levels often dipped below optimal levels for those who enjoyed it year-round, particularly during the summer season when Lake Hopatcong was a tourist attraction. However, the mills and other property owners downstream relied on a fully flowing Musconetcong River. The fountain was created in conjunction with a state take over the canal property and plans to build a new damn. 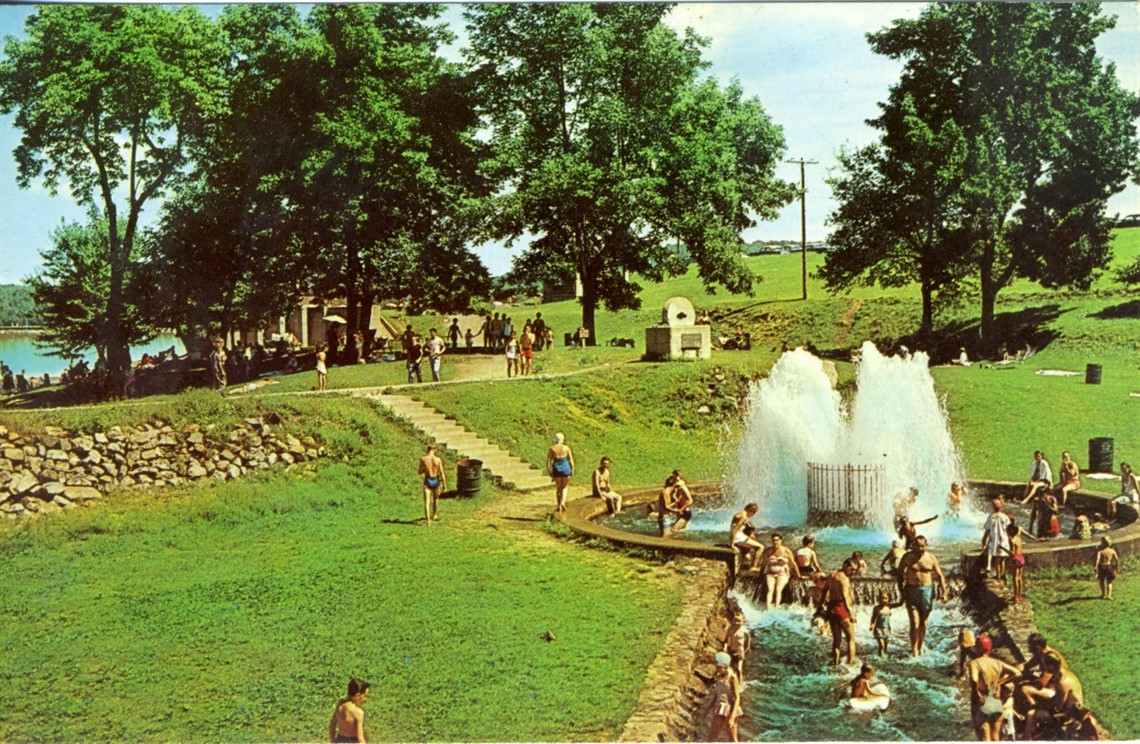 As Kane explained it in one of his many writings about the history of Lake Hopatcong: “The building of the fountain at Hopatcong State Park was the result of a compromise reached between lake residents and the Musconetcong River advocates. Designed by Cornelius C. Vermeule, the consulting and directing engineer in charge of the dismantling of the Morris Canal, a 24-inch pipe was placed in the dam leading to the fountain. The fountain was placed in the center of a circular concrete basin 40 feet in diameter to catch the falling water. Vermeule’s calculations determined that this flow of water into the Musconetcong River would be equivalent to the amount supplied by the lake before the original dam was built and ‘would lower the lake probably not more than six inches or a foot during the season.’ As a side benefit to this measuring tool, Vermeule designed the fountain so that the water would spout up to a height of about 12 feet and he purposely placed it in a central position visible from the nearby road.”

The fountain worked regularly in the decades that followed, with photos of families cooling off in its flow gracing the front of postcards in the 1950s and 1960s even after the state park beach was established nearby. However, by the 1990s, bathing was prohibited because of liability concerns and the fountain’s use was abandoned because of maintenance issues. Interestingly, debates still erupt from time to time at Lake Hopatcong over how much water should be allowed to flow down the Musconetcong River.

“The role of the fountain in measuring the flow of water to the Musconetcong River appears to have been forgotten. One must wonder if much of the discord about the amount of water being allowed to flow out of Lake Hopatcong in recent years may have been avoided if the fountain had continued to be used for the purpose for which it was built,” noted Kane.