The 120-year-old Chester Branch Railroad trestle over Berkshire Valley Road was reopened to rail service today after being damaged over a week ago by a truck accident.

Engineers initially estimated the road and trestle would need to be closed for up to a month while conducting repair work, but contractors were able to obtain steel replacement beams and make repairs on an expedited schedule. Motorists traveling under the trestle will continue to alternate use of one lane, with the traffic controlled by electronic signals, as repairs continue to be made to the trestle.

A large truck had slammed into the trestle on July 13 causing significant damage. 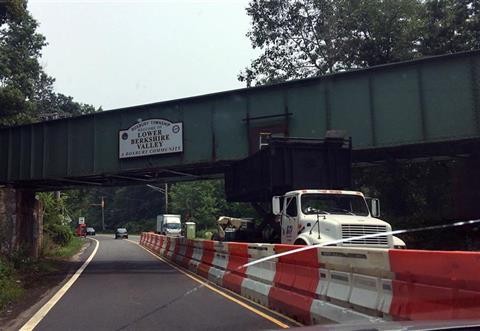 Berkshire Valley Road is a major route for commercial trucking, stretching from Route 46 in Kenvil to North Dell Avenue. However, truck traffic is limited by the fact that passing trucks cannot be higher than 11 feet, 5 inches because of the trestle. The clearance limit is noted on large signs for truckers to observe.

While the project is still years from being finalized, the goal is to improve and maintain the freight rail service and to improve the traffic pattern along Berkshire Valley Road and North Dell Avenue.