The holidays can be a joyous time for most of us: planning parties, family get-togethers and warm cozy dinners. But for many of us, they can be bittersweet.

I lost my mother, Gertrude Kertscher, just before Christmas 10 years ago in 2009.

Gertrude’s cousin, Jürgen Neugebauer, was here on a Thanksgiving/Christmas visit when she passed away. He has been a regular guest of ours since the 1960s, and often chooses Thanksgiving or Easter to come over because of the wonderful meals he has enjoyed cooked by Gertrude, and later, by me. 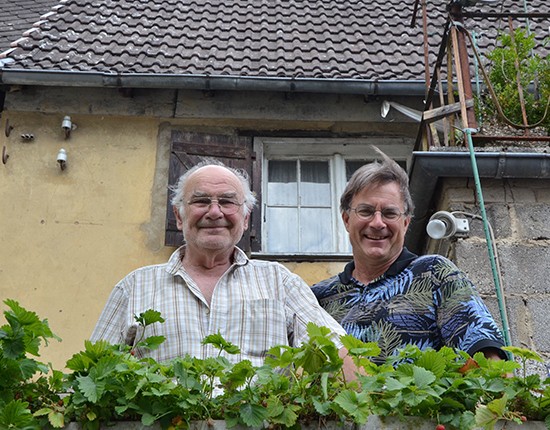 Jürgen lives in Wiesbaden, Germany (Gertrude’s hometown), in a house his family has lived in for over 200 years. It is a timber-frame (Fachwerk) house in the historic neighborhood of Sonnenberg. His mother, Tante Lucie Neugebauer, was a cousin of my grandmother’s, Emma Makowski. I haven’t been able to calculate the exact extent of our relatedness, but I’ve always called him my cousin.
A cousin of a cousin of a cousin?

Jürgen, 78, has lived alone in that tiny little house since his mother passed away. He loves coming to the U S. to spend time with our family every chance he gets. 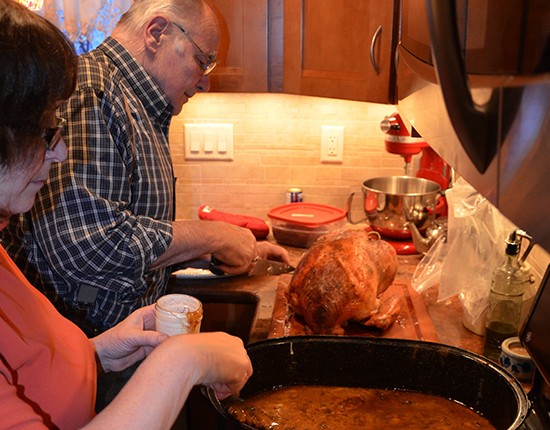 Jürgen has turned up on my doorstop all through my travels—he loves nothing better than to surprise me, showing up unannounced wherever I am in the world.

His knack for navigation with nothing more than a street address has never ceased to amaze me.

He’s even surprised my daughter, Erika, a few times in his travels in London, having “escaped” from a guided tour he was on. He gave the tour directors some hair-raising moments when they discovered he was missing. He has always managed to find his way back, though.

Jürgen has spent many Thanksgiving dinners with us. It is probably his favorite American holiday. He is always our designated turkey carver, a task that he looks forward to all year long. He helps me prepare the side dishes—red cabbage being one of his specialties (Volume 8, No. 7).

In this issue, I’m going to share his recipe for Brussels sprouts, which he just taught me how to make last year. But first, I’d like to share some excerpts from the touching eulogy he gave at Gertrude’s funeral.

Jürgen’s first memories of Gertrude were from when he was about 6 years old. It was just after the war and Gertrude’s parents’ house was occupied by American troops. Gertrude, her husband-to-be, Horst, Hans and Emma Makowski (Gertrude’s parents) all moved into Jürgen’s house with his mother, Tante Lucie Neugebauer and his brother, Helmut. It was—and still is—tiny, built in the 1600s.

It is incredible that all of those people lived under that roof (sharing an outhouse with 13 other neighbors, my mother always liked to add!). I’ve stayed there myself and still have trouble imagining where they put everyone.

From Jürgen’s eulogy: “Working at the PX, Gertrude was able to obtain plenty of food items that were normally rationed, so Horst and Gertrude were able to plan a festive wedding. An aunt from America sent a 5-pound can of Spam, we made a beautiful buttercream wedding cake that looked to me like it was made of noodles, and a “Bowle”, fruit punch from the liquor that she was able to buy. I vaguely remember eating all of the fruit from the wedding guests’ glasses and getting so drunk that I missed out on my “Nudelkuchen!” (noodle cake)”

After Gertrude and Horst immigrated to America in 1952, Gertrude’s father, Onkel Hans Makowski, would read Gertrude’s letters to Tante Lucie and Jürgen so they always knew what was going on with the Kertschers in the U.S.

Jürgen joined the German Merchant Marines and had the opportunity to see the world and visit Gertrude and her family several times in the States.

Jürgen was instrumental in helping Gertrude with several of the exchange programs she organized between Dover High School and a school in her hometown of Wiesbaden.

He wrote, “Gertrude and the students arrived in Wiesbaden during Fassnacht (Mardi Gras) and the youth hostel that they were supposed to stay in was closed. That night Gertrude’s students had the pleasure of sleeping on mattresses strewn across the floor of her former ‘honeymoon suite’ in my little house in Sonnenberg.”

So, as the first of the holidays draws near, I think about Jürgen and how lucky I am to still stay in touch with him. He’s the last one who knows all of our family stories, and I am grateful for that.

And guess what? He’s coming for this Thanksgiving, too. 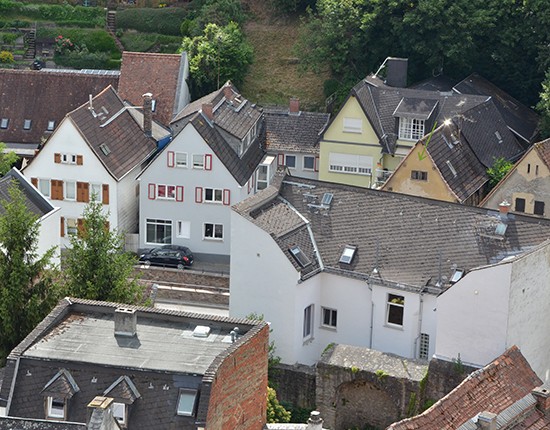 Although we have bought and prepared entire stalks of Brussels sprouts from the local farmer's markets, Jürgen recommends using the ones they sell at the supermarket in the white paper tubs because they cook more evenly—they are uniform in size.