My father, Horst Kertscher, had a knack for growing things.

He, his four brothers and three sisters grew up working the farms near their home in Ehrenhain, Germany. Farming was something that all of them understood. They lived close to the earth, in tune with the seasons and the weather. Horst brought his farming traditions with him wherever he went in the world.
He served in the German Army in World War II and was captured by the British in Northern Africa. He was transferred to the Americans and then brought to the U.S. as a prisoner of war.

He and the other German prisoners were sent from farm to farm all over the southwest to pick crops as there was a shortage of farm laborers. Horst had very fond memories of his time in the states and how well he was treated.

When he returned to Germany after the war, he tended the garden for the American officer that was occupying my mother’s house. My mother loved to recall Horst with a wheelbarrow full of corn that he had grown from seeds sent by Colonel Sprigg’s family in Colorado.

Horst also took care of our landlady’s garden on Chestnut Street in Montclair, tending the ornamental perennials in the front yard and the vegetables in the back. There were rows of tomatoes interspersed with nasturtiums, asparagus, pole beans and always rhubarb.

When we moved up to the lake, Horst brought some of the rhubarb plant with him. He grew it along with mache salad (Rapunzel), herbs and tomatoes in the two raised beds he built just off the kitchen steps. My mother, Gertrude, took great pleasure in harvesting from their little vegetable garden, making “Rhubarbara” (V6_No_2 Memorial Day issue 2014) as soon as the rhubarb was ready.

A couple of years ago, between renters at the lake house, I dug up the rhubarb plant and brought it to my house in Stockholm. I planted it on the side of the house nestled between the hostas and hydrangea and have enjoyed my own little harvest in May when the rhubarb is ready.

Rhubarb will grow as big as it has room to grow in. My plant isn’t much bigger than my hostas, but I’ve seen rhubarb plants grow leaves 3 feet across and stalks 2 feet long.

Like many lettuces, you can cut as much as you need, and new stalks will spring up, giving you one or two more harvests over the months of May, June and July.
Only the stalks are edible, however, and rarely eaten raw. The leaves contain high levels of oxalic acid and can cause severe gastrointestinal distress and poisoning although you’d have to eat several pounds of rhubarb leaves to reach a toxic level.

(I’ve always wondered about the person who figured this out. The stalks are OK, but the leaves are not. Talk about a learning curve.)

Rhubarb is very tart and must be prepared with lots of sugar to make it palatable. It wasn’t until the 1800s that rhubarb was consumed, copiously sweetened with lots of sugar and enjoyed in pies, crumbles, compotes, fools, custards, jellies, jams and wine. From a mid-1800s cookbook: “for stewing or pies, no spice is required, but sugar may be put in as long as your conscience will let you, and a handful afterwards.” 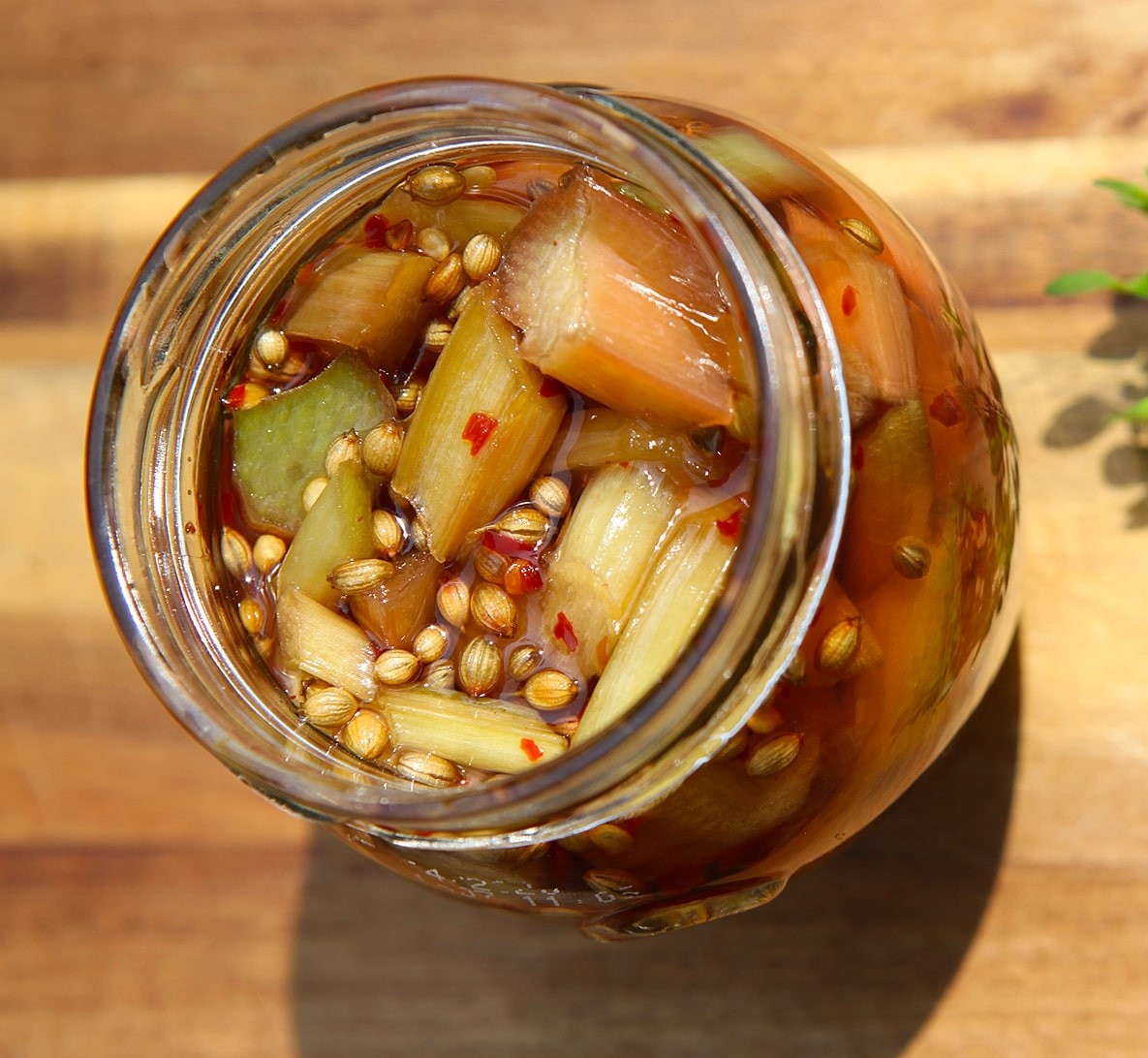 I recently found this recipe for a tangy, spicy, fragrant rhubarb pickle that goes really well with cheeses and roasted meats, especially pork.

¾ pound rhubarb, sliced about ½-inch thick, on a diagonal

I always read your cooking column in LHN.  I also have a rhubarb plant from my childhood home in Milton and it never fails to produce.  My husband divided it once again this past Spring. We harvested up until last week. Love how you tell about your personal life along with your recipes. Was not familiar with LHN until Spring when Karen did an article on Mask making, of which I was doing with my small quilt group.