My husband, Aaron, and I will be married for 37 years this October. He has been a terrific husband and is a great father to our children. He is a good man, a handsome man, an honest, hard-working man, a skilled carpenter and auto mechanic and a great skier.

We fell in love shortly after I graduated from college. Not having the loftiest of career goals at that time, I was selling cosmetics and working at Dick’s Diner in Dover learning how to be a salty diner waitress.

It was in the summer of 1977, and we ran into each other at a mutual friend’s house. My heart skipped a beat on seeing him again.

We had met in seventh grade at Jefferson Township Junior High School. He was from the Milton side of town, I was from the lake side.

For most of us, it was the first time we had ever met kids from the other side of town. We, the lake kids, were in agreement that we were way cooler than the Milton kids. We had boats, we went water skiing, we cruised on the lake to Bertrand Island at night.

The Milton kids were the “rural” bunch. Some of us used to call the grocery store on their side of town the “A and Poo Feed Store.” Gosh, we were mean.

Despite the cultural differences, I remember having a serious crush on Aaron in eighth grade.

So, on that fateful afternoon in our friend’s kitchen, I thought to myself: “There’s that cute boy I used to know from junior high school. He’s even cuter now.”

I’m pretty sure similar thoughts were going through his head as well.

Our first summer together was a whirlwind—trips up and down the east coast in his “rat” (’66 Volkswagen bug) with mix and match fenders, riding his Triumph motorcycle all over creation, water skiing and sailing on the lake. Aaron worked in a local garage and helped me find my first Volkswagen, a black 1968 Beetle. He took extra good care of my little bug all summer long. I was initiated into the cultish group of Volkswagen owners and became a huge fan of the VW brand.

Even as late as 1976 the VW was still a counter-culture icon and there was a certain cachet to owning one. Their advertising campaigns were very self-effacing and always tickled my funny bone.

Here are a few slogans from their unforgettable ad campaigns:

It makes your house look bigger.

Fahrvergnügen – it’s what makes a car a Volkswagen.

Hitler trusted us. Why won’t you?

It’s ugly, but it gets you there.

Beauty is only skin deep.

And who doesn’t remember the scene from Woody Allen’s 1973 movie “Sleeper” when he drives the 200-year-old VW Beetle he finds in a cave off a cliff into a pond and the car floats?

Volkswagen culture was a big part of our relationship.

One thing that hung over my happiness all summer was Aaron’s impending departure for Vermont in the early fall. He had spent the previous three winters in Stowe, living like a local, working in town and skiing every day. To him, skiing was as necessary as oxygen. Winter in Stowe was what he worked for all year long.

Finally, the day came for him to leave and Aaron packed up his worldly possessions and his beagle dog, Scraggs, into the “rat.” He came over to my house that morning to say goodbye.

Not wanting our time together to end and hoping to prolong each and every one of our last moments, I followed him in my Beetle from my house on Castle Rock Road to the spot where we could both pull over near the sand pits on Berkshire Valley Road, just before route 15. We both got out of our bugs and embraced.

Our last moment seemed frozen in time, and I was hoping for some profound words of love, a fond farewell like: “There are no goodbyes for us. Wherever you are, you will always be in my heart.” Mahatma Gandhi. Or, “Goodbyes are only for those who love with their eyes. Because for those who love with heart and soul there is no such thing as separation.” Rumi. Or, “How lucky I am to have something that makes saying goodbye so hard.” A.A. Milne (Winnie-the-Pooh)

(I Googled these under “romantic goodbyes.”)

When we finally released our embrace, Aaron kissed me goodbye, looked deeply into my eyes and said: “Don’t forget to check your oil.”

So, I guess the moral of this story is that even if your spouse is not as romantic as you’d like him or her to be, there are still going to be times you want to fix a romantic dinner for the two of you.

Here is a recipe for steak Dijon, a dish we enjoyed at the Coal & Lumber restaurant in Park City, Utah during one of our ski vacations back in the day.

You guessed it, we drove our Volkswagen out there and back. 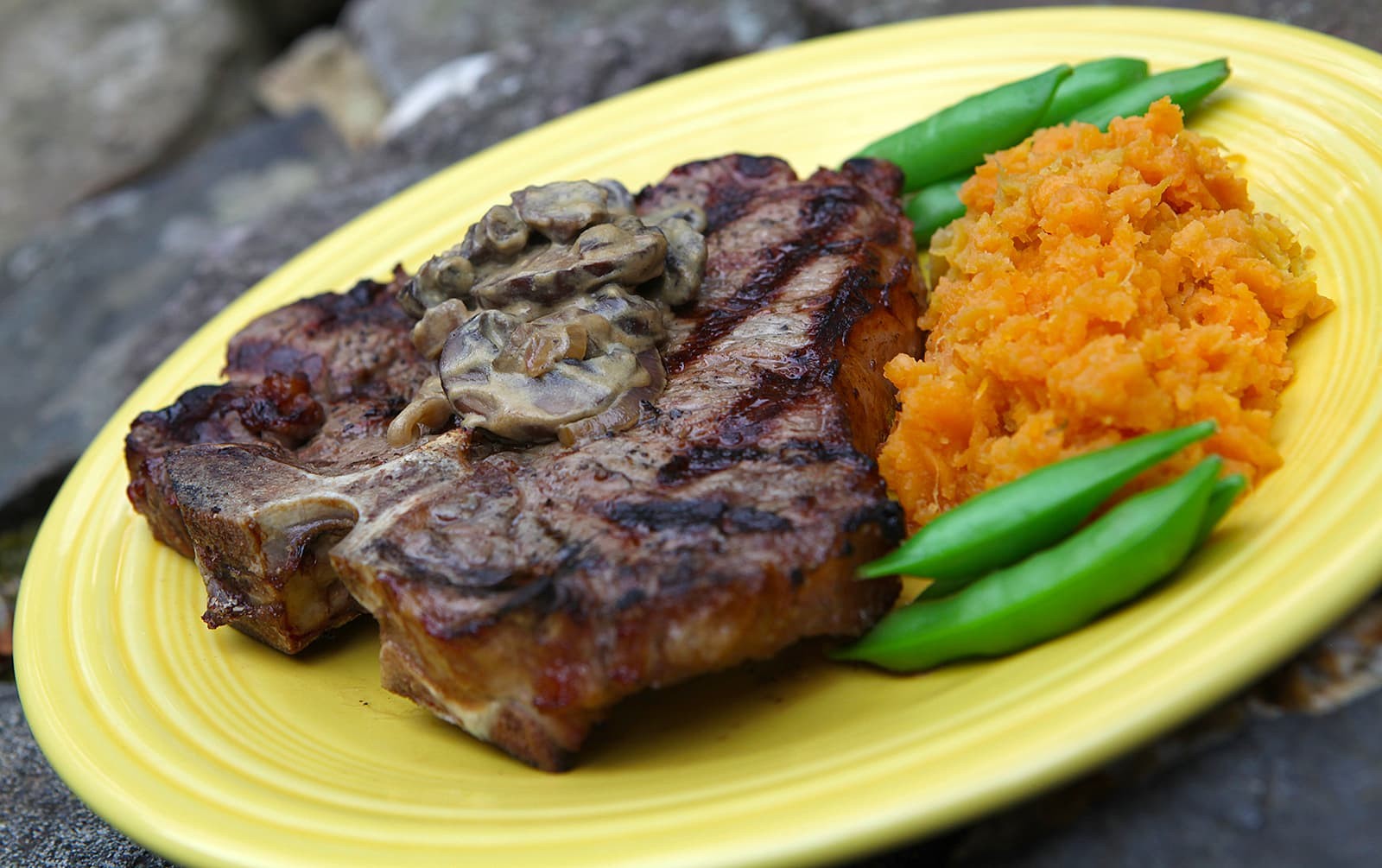 The steak can be grilled over charcoal, on a gas grill or broiled in the oven. Decide on which method you like best and preheat your oven or prepare your grill.

The steak can be grilled over charcoal, on a gas grill or broiled in the oven.
Decide on which method you like best and preheat your oven or prepare
your grill. The sauce can be made while the grill heats up.
Dijon sauce: